Phoenix Suns get 19 pieces of coal for the holidays

Taking a quick look at the schedule over the next month is like getting a beautifully-wrapped present only to find coal, or a pair of tube socks, inside the box.

Share All sharing options for: Phoenix Suns get 19 pieces of coal for the holidays

Despite a recent four-game winning streak and what Jared Dudley classified as an encouraging loss to Portland last night, the Phoenix Suns face the prospect of being favored to win only two of the next 19 games (between now and January 31).

The Suns are pretty good at home, with a 9-5 record on the season including two recent wins against winning teams (Memphis and Utah). But that doesn't mean they should be favored to win two-thirds of their home games from here on out. Not against a parade of winning teams.

After the next month is over, the Suns could be facing the prospect of a 13-32 record and a bottom-five NBA ranking even if they keep playing at this recently-respectable and often-enjoyable level of play.

The schedule is just that daunting.

The Suns have nine home games between now and January 31, 2013, but only two of those games is against a team with a losing record (Philadelphia, Lakers). The other seven are against current playoff-eligible teams, which means none of those seven can be predicted wins for the Suns.

Sure there are two more home games in there against Utah and Memphis, who the Suns just beat last week, but to predict another pair of wins against those winning teams would be a break from the tenets of statistical modeling.

Even with the Suns at their high-water mark of the season (they hit #21 yesterday on Hollinger's stat-based daily power rankings!), the Suns are favored to win only one home game between now and the end of January. Take a look at the pic below to see the sked.

As bad as the upcoming home schedule looks, optimists can hold out hope the Suns can ride the home crowd to maybe a couple of upsets. Heck, the Clippers, Knicks and OKC are all due to lay an egg in the near future, while the Grizz, Jazz, Sixers, Bucks and Lakers are far from juggernauts.

The road is where the rubber meets the backside

As good as you might feel about the prospect of upsets at home keeping the Suns respectable, once you take a look at the road schedule your heart just has to drop.

The Suns play 11 road games before February 1, and only two of them are against teams currently sporting a losing record (Sacramento, Dallas). Only Sacramento is enduring a worse season than the Suns.

Considering the Suns just cannot yet find a way to win consistently on the road against anyone (2-11 on the season), let alone good teams, this next month could get ugly. U.G.L.Y. The Suns can only be favored to win ONE of 11 games: @ Sacramento. And that's only if Sacramento stays on its current head-scratchingly-bad course.

For those following along, that's only three of their next 19 games against a losing team (Sacramento, Philadelphia, Lakers). And of those three, only one of the teams has lost more than the Suns this season.

Take a look for yourself - I'd love to hear some predictions with a brighter side than mine. 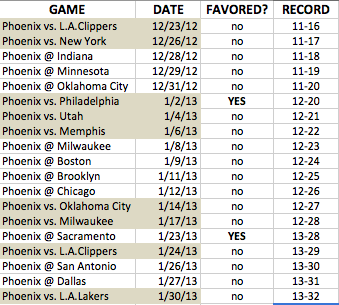 I truly hope the Suns garner some upsets and exceed expectations.

But even this most recent competitive edition of the Suns looks to hit this upcoming schedule like the subjects of that show 'Ridiculousness' on MTV: faceplant-style.

Enjoy the recent win streak as long as you can, fans. Because there won't be another one for a long time.