The Suns dropped a very winnable home game to the injury-riddled New York Knicks. It came down to a couple of late possessions which are normally the difference between decent bad teams and good winning teams.

Alvin Gentry in his postgame comments talked about the Suns turnovers, but they only had 13 for the game which is not a bad number. Jared Dudley, in response to a question, had no answer for why the Suns failed to get the job done in the key crunch time possessions -- at least not an answer he was willing to say publicly since we all know the answer is lack of elite talent.

J.R. Smith's Offense Was Just Better Than P.J. Tucker's Defense - SB Nation Arizona
"Back-to-back turnovers, can't happen. Can't happen. Those are the types of things that cost you games in a close game like this. they can't happen. They shoot 45% and if you go back and look they get five lay-ups off of our turnovers. There is no excuse, can't turn the ball over when you are up, have possession of it, and it is a tight game, and every possession counts."

Now let's look at two of those final possessions.

The Suns with the ball, game tied ran Dudley (and why not) off three screens. The Knicks switched all of them as expected and on the final one that left Gortat wide open rolling to the rim. The play design was good, but Jason Kidd got his paw on the pass from Telfair to Marcin.

These things happen when you run a "play" instead of going isolation "hero ball". 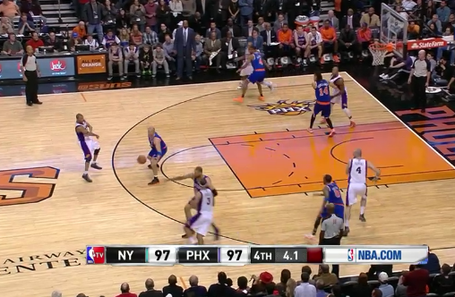 Here's Smith's buzzer-beater. You will note in Gentry's presser he says the Suns had the play well scouted. Why then isn't Jermaine O'Neal hedged baseline all the way to prevent the pass?

And finally, here's the J.R. Smith foul on Dragic. None of us know what's in Smith's heart, but I believe he streaked back on defense but realized Goran had him beat and tried to pull up and avoid the contact but wasn't able to totally get out of the way.

Flagrant? Fine. Whatever. But I see it as more an unfortunate play than anything "dirty". This Dwight foul, on the other hand, was pure punk.

Hornets 97, Magic 94: Orlando drops third straight without Glen Davis - Orlando Pinstriped Post
Orlando had no way to stop Hornets 7-footer Robin Lopez. The former Stanford big man poured in a season- and a game-high 29 points, shooting 9-of-10 from the field and 11-of-12 from the free-throw line.