The Phoenix Suns turned the ball over nine times in the first quarter of their game against the Knicks on Sunday. Here's a recap of them all because you haven't suffered enough, Suns fans.

Before we dig into this bloody business, it's important to note that the Suns have not been plagued by turnovers this season. In fact, their ability to NOT turn the ball over has been one of the few bright spots on an otherwise blah start to the season.

The Suns are fourth-best in the NBA with a turnover rate of 12.8 per 100 possessions. They are behind Toronto, Philadelphia, and New York -- all teams, ironically, that the Suns have fallen to in the last week.

Here's the nine turnovers from the first quarter on Sunday. They have eight more for the entire game so you could argue this one issue caused the loss (although I don't fully buy that).

Turnover #1: One their second offensive possession less than a minute into the game, the Suns come down and run a high pick and roll with Dragic and Gortat. The defense collapses with Morris' defender helping in the lane. Instead of kicking out to the open Morris for a three, Dragic tries to force the ball to Gortat in the lane and travels.

Turnover #2: At about the ten minute mark, Shannon Brown beats his man to the middle but has his head down and barrels right into the chest of Kurt Thomas who was camped out just below the free throw line long enough to have the paint transfer to the soles of his shoes. The game was 6-4, Knicks at this point.

Brown was the only starter with "just" one turnover. The rest had two each. Brown only played four minutes in the period 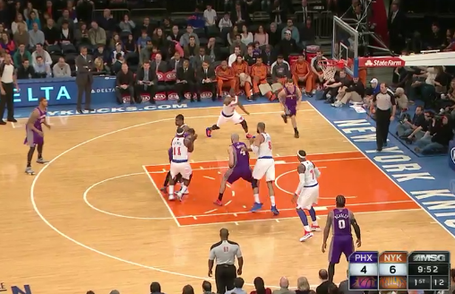 Turnover #3: The Suns run a nice little play designed to take advantage of the Knick tendency to switch picks (just like Woodsen's Hawks teams used to do). Brown sets a cross screen for Gortat's man (Chandler) coming across the lane and Ronnie Brewer switches on to the Polish center who has good post position with a guard on his back.

Beasley, however, throws a horrible entry bounce pass that skips out of bounds. That's about the 7:55 mark with the Suns already down 13-6.

Turnover #4: About a minute later with the Suns now down 16-6, Gortat sets a ball screen for Beasley who denies the screen and drives past Melo. Melo, however, comes around from behind and swipes the ball. This was a pretty nice little steal from Anthony. 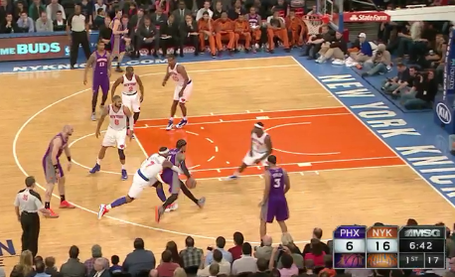 Turnover #5: About 30 seconds later (Suns down 18-6), Dudley tries to throw an entry pass to Morris who has J.R. Smith on his back after another Knicks switched screen. Smith does a good job battling Morris which forces Dudley to pass the ball a bit high. Morris should have still grabbed it but seems to take his eye off the ball and it gets away from him.

Turnover #6: Michael Beasley is advancing the ball after a rebound and around the half court line picks up his dribble to advance the ball to Goran but Goran isn't looking for the pass and the ball goes out of bounds. 5:44, Suns down 18-6.

Turnover #7: Dragic and Gortat run a high screen and roll. Morris is spaced behind the three-point line but is too close to the middle and when Dragic tries to bounce him the ball, Brewer easily reads the plays and gets the steal.

Turnover #8: With about 3:33 left and the Suns down 21-10, Morris runs down the floor and barrels into Steve Novak as he tries to get good post position. Offensive foul.

Turnover #9: Dragic and Gortat run a high screen and roll. Instead of trying a bounce pass, Goran lobs the ball to the rim for what should have been a dunk but the lob is off and hits the rim and Gortat touches it for an offensive basket interference call. Suns down 21-14 with 1:45 to go. 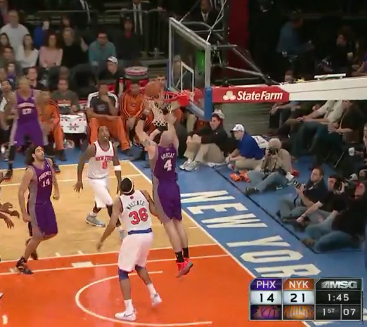 That's it folks. Do you see a pattern here? Both of Morris' turnovers were just dumb. Beasley's too. Goran made a couple of bad passes.

The Suns were down by seven before the third turnover and down by ten by the fourth. But the Suns defense, at least statistically, didn't suck. New York shot 39% from the field (25% from three) while the Suns shot 46.7% in the first quarter. Those numbers will win you games, but the Suns only had 15 FGAs to the Knicks 23 thanks to those lost possessions.

So yeah, nine turnover in the first quarter killed the Suns in this game. Of course, getting outscored 35-22 in the second quarter and giving up 56% shooting and four threes didn't help either.

Dude, Bright Side of the Sun is on the FaceBook.