The Phoenix Suns had a chance to beat the Houston Rockets on Thursday night. The bench unit got torched in the second quarter but the Suns shot well in the third and got back in the game. In the fourth quarter, however, Phoenix only scored 13 points. Eight came with Nash on the bench and five when Nash came back in the game.

Suns were down 83-84 when Nash came back in at the 6:20 mark, making it a very winnable game. From there, Houston finished on a 13-5 run, mostly thanks to their active defense.

Houston employed the same strategy the Lakers used to shut down the Suns on the 10th of January. They went small with Scola/Patterson, Budinger, Parsons, Lowry and Dragic. That's a four playing the five and a three playing the four.

After getting killed on the glass 37-21 through the first three quarters, the small Houston lineup allow the Suns to win the boards 10-7 and Phoenix gave up no offensive rebounds and no second chance points in the fourth quarter (Houston had 12 OReb and 22 second chance points for the game).

By going small, however, the Rockets were able to switch some pick and rolls and basically created havoc by rotating quickly.

Lowry took two charges and had a great block in the stretch. Budinger was solid on his weak side rotations. And like in the Lakers game, the Suns weren't able to take advantage of the extra size Gortat and Frye had because they are not post players. Gortat missed a make-able shot and twice was fouled on open layups and went 1-4 from the line.

Here's a breakdown of all the Suns possessions from the time Nash came back in with 6:20 to go in the game. Details and screenshots come from mySynergySports.com, which is an awesome service if you are so inclined.

4. Hill turnover on the baseline OOB

7. High p/r with Nash and Gortat. Parson's switched on to Nash, entry pass to Gortat deflected by Budinger who rotated over, ball of Gortat. Turnover. 90-85, Rox. (Screen shots below)

11. Curl into side p/r with Nash. Pass to Gortat in the post, quickly doubled, bad pass leads to turnover and runout. 94-89, Rox

This possession starts with a quick screen from Frye on Dragic. Parson switched on to Nash. In this screen shot you see Gortat setting up the p/r bring his man, Scola into the play. Note where Budinger is at the top of the key. 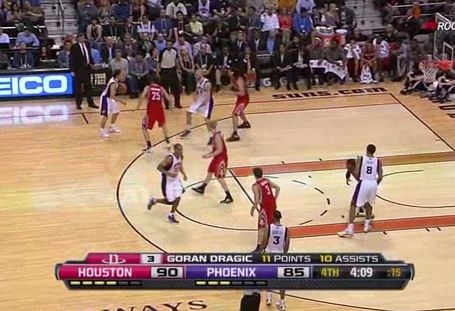 Parsons and Scola trap Nash, Gortat is open but Budinger quickly rotates over and deflects the pass and causes a turnover. 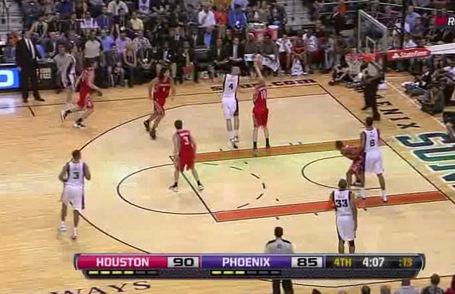 This was a pretty play. Frye holds the ball at the top of the arc as Nash runs off a couple of screens. 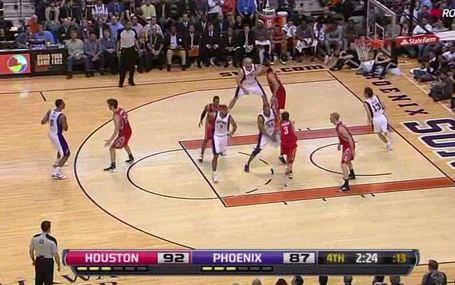 Dragic is screen by Gortat so Nash has space when he catches the ball here. He pump fakes Dragic out of the play, forcing Scola to leave Marcin open. 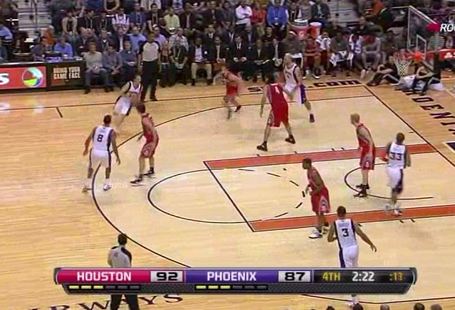 Nash finds the open Gortat (of course) but Budinger quickly rotated over and fouled Gortat and prevented the layup. 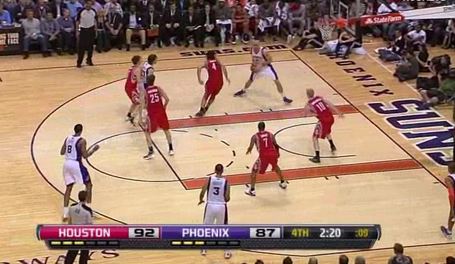