Steve Nash Hasn't Given Up on the Phoenix Suns, and Neither Should We

Share All sharing options for: Steve Nash Hasn't Given Up on the Phoenix Suns, and Neither Should We

The lovefest will continue because Steve Nash day isn't quite over yet. If you don't like it, then I guess you're just not a good person.

Over the course of this season, we've seen what can be gently described as sub-par, boring basketball from a declining Suns franchise. Our own fans are calling the team "boring to watch".

Boring to watch. Wow. That's the one thing that we've never been before. That's one of the reasons I root for this team through the thick and the thin. The other reason to keep watching? Super Steve. When he handed out his 6,519th assist at the Hornets game on Wednesday, becoming the Suns' all-time assists leader, I was there giving him a standing ovation. The way he plays the game, and the way he views life, is all about the assists, as Wil's article on him earlier today mentions.

Throughout this thus-far painful season, Steve has been a constant. He brings it every night, and in the midst of speculation and endless Bleacher Report articles detailing which 10 teams would be best for him, he refuses to even discuss which teams other than the Suns he would like to play for. He refuses to ask for a trade, like so many NBA superstars have been doing in recent years. He's a truly loyal player who wants to win, yes, but also wants to have the best team chemistry possible.

So keep your heads held high this season, Suns fans, and remember who it is that you're watching.

I became an NBA and Suns fan primarily because of Steve Nash. The high-powered Phoenix offense and locker room camaraderie drew me in, and I haven't looked back since. Steve is the driving force behind both of those things. On Bright Side of the Sun, there are 34 active members with "Nash" somewhere in their username. I have a Nash Suns shirt that I bought in Jerusalem, Israel. The man's influence is worldwide and that is evident in the international membership of BSOTS.

But, of course, Steve wouldn't admit that he has this kind of influence. He'd emphasize the Suns as a team and an organization, not as an entity, a brand, and an idea that has revolved around one person in particular over the last eight years.

So here's to Steve. Hit him up on twitter @SteveNash if you're into that kind of thing. 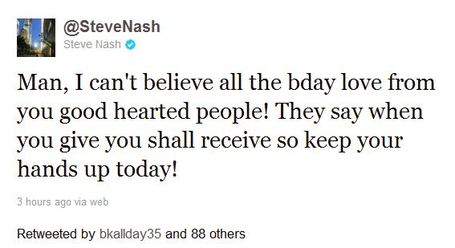