Share All sharing options for: Suns Rebounding, Winning And Some Bench Dudes

There's a lot of ways you can look at numbers and sports. Most of them are bogus and misleading. Why change what works?

Here's some numbers about your Phoenix Suns, their rebounding ups and downs, the wins and losses that happen when the rebounding is better or worse. And to make things even more useless, a look at three bench guys and how they fit into the rebounding picture.

Let's begin with this futile act of senseless analysis.

1. How much does rebounding matter?

But it does seem to matter...some. 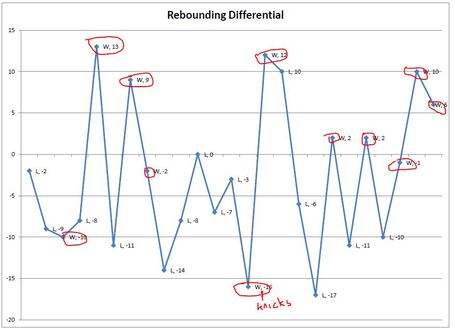 I'm no math genius (or any kind of genius) but that seems kind of important to me. Rebounding.

2. Who rebounds well on the Suns?

This one is easy to answer, just fire up the old Basketball-reference.com and check this out:

In case you can't read that, the order of rebounding rate is Gortat, Lopez, Frye, Morris, Childress, Warrick and then the rest.

Steve Nash, btw, has the worst rebounding rate on the team proving how worthless he is. Clearly, because I just told you how important rebounding is. Duh.

3. What happens when Lopez, Warrick or Childress play more or less minutes?

And now things get really interesting. Let's put aside a lot of garbage about this season like "roster talent" and "#FreeNash" and "energy" and just look at the pieces Gentry has to work with.

It's like a puzzle, right? Each guy does some things better than other things and Alvin's job is to fit them together.

Gentry isn't going to turn Robin Lopez into a three-point scoring machine. He's not going to be able to make Hakim Warrick defend the pick and roll (or anything) better. These guys pretty much are who they are.

What the coach can do it put the right combinations of dudes on the floor at the same time and try and get the fellers to play to their potential.

So...let's help him out w/ a little number crunching. Here's a little chart showing the differences between Lopez, Chill and Warrick. 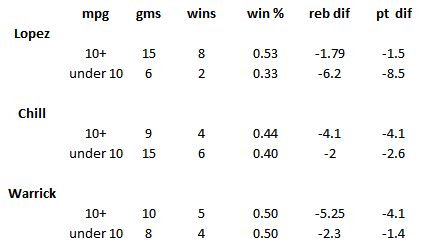 As you can see, the more Warrick plays, the worse the Suns rebound. When Lopez and Chill play the Suns rebound better. And we've already established that rebounding is the most important factor in Suns wins something that happens.

Clearly, Gentry should play Warrick less and play Chill and Lopez more...kind of like he did in the last three games which, in case your not paying attention, were wins (and the Suns were +15 on the glass).