Share All sharing options for: Phoenix Suns Rollercoaster Schedule Gets Much Tougher

Fortunately, the Suns have taken care of business at home recently to pull their season out of the muck and into 9th place in the West. One final win on this homestand tonight against Houston can pull the Suns within 1/2-game of a playoff spot. Sounds rosy, right?

Unfortunately, the only thing rosy about the subsequent 15 games are the thorns.

Starting Tuesday in Miami, the Suns play 12 of their next 15 on the road with two of their home games against Western powers San Antonio and Los Angeles (Lakers). Ouch. If you look at current records and team strengths, the Suns would be favored to win only 4 of those 15 games.

After the jump, take a look at the Suns' upcoming opponents as well as the schedules of their immediate competition for a playoff spot (including pretty charts). 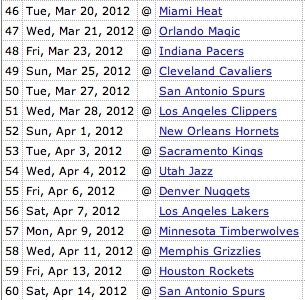 *All graphs courtesy of basketball-reference.com

Playing only the odds, the Suns could comfortably be expected to win just 4 of those 15 games (Cavaliers, Hornets, Kings and Jazz). But really, that's even a stretch since only 1 of those games (Hornets) is a home game. The other teams will likely be tanking though, enhancing the Suns' chances for a needed W.

But what of the other 11 games in that 15-game stretch? Which of those can the Suns hope to win? Maybe Orlando, the NBA's best impression of Jekyll and Hyde. Maybe Indiana, who just got smoked by an energized Knicks team twice in a row. Maybe the Timberwolves, sans Rubio. And maybe Houston, who the Suns seem to be able to beat fairly often.

So, if all goes really well, then the Suns might take 7 or 8 wins out of this 15-game stretch. But you can't put those 7 or 8 wins in your back pocket. Just thinking reasonably, the Suns will lose at least 2 of those "winnable" games. To offset those losses, the Suns would have to pull off a couple of upsets against better teams just to come out of this 15-game stretch with a .500 record.

After that, the season closes with 5 of 6 at home, with 4 of those against playoff teams jockeying for final positioning (Thunder, Clippers, Spurs, Nuggets).

A reasonably optimistic final record after the schedule gets a lot tougher? 33-33.

Now the big question: is that enough to make the playoffs?

Here are the current standings...

According to basketball-reference.com, the Suns project only to 31 wins (a 9-13 finish) and an 11% chance to the make the playoffs (behind Houston, Portland, Minnesota and Utah).

Let's take a look at the playoff projections: 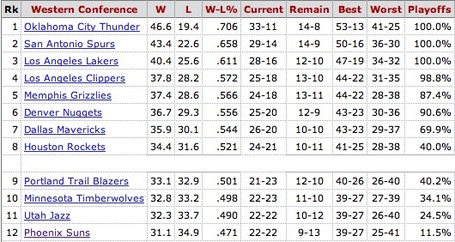 As you can see, the Suns project to have the toughest finishing schedule of any team close to them in the standings. Sure the projected record for remaining games is similar (ranging 9 to 12 wins), but 3 games is a huge difference in the standings.

Will Portland AND Utah tank the rest of the season, dropping them out of the hunt? Probably.

Will Minnesota lose more than half their remaining games without Ricky Rubio? Maybe.

But will Houston lose most of their remaining games? That's the big "I dunno". They've been bad recently, despite Dragic "killing it" in the last few, but they picked up Marcus Camby at the deadline and remain, overall, more talented than the Suns.

That's a lot that has to go right for the Suns to make the playoffs, BSotS fans.

What say you? Will the Suns earn the right to play OKC in the first round?