In other words, the standings haven't changed much. 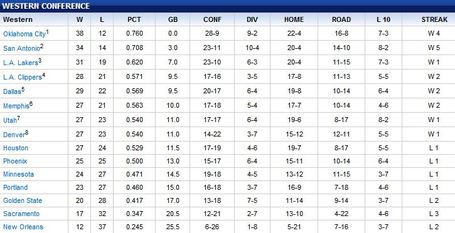 Wolves, Griz, Barnett Kia: An in-game preview review of the Wolves' win or loss vs. the Memphis Griz

OK, that about does it. This game is done. This loss hurts. Any loss against the Jazz, Houston, or Memphis just guts the team's chances of making the playoffs. The Griz entered this game on a bad stretch of ball and the Wolves were unable to close the deal because Kevin Love can't win games all by his lonesome.

Despite a recent stretch of poor play, the only way Memphis is going to miss the playoffs at this point is if Zach Randolph and Rudy Gay butt heads, or if Gilbert Arenas organizes a high-stakes card game.

Minnesota, however, now sits at 24-27, 1.5 games behind the Suns. We can't count them out completely at this point, even without Ricky Rubio, so this was the best possible outcome for the Suns.

According to Mavs Moneyball, The Dream Shake doesn't believe in recaps.

The Mavericks also seem to be pretty solidly in the playoffs barring a massive collapse, so a win by them doesn't hurt Phoenix.

Houston, however, is the team directly in front of the Suns in the standings after last night's games. Every Rockets loss is good for the Suns, who are still without their starting backcourt of Kyle Lowry and Kevin Martin.

Russell Westbrook destroyed everybody the Blazers sent against him and the defensive breakdowns he caused left the floor open for everybody else. The Thunder handle the Blazers like a long-haul trucker handles a ham sandwich.

The Trailblazers aren't completely out of the race just yet, but they do appear to be in full-on tank mode, and this loss brings them one game closer to the lottery.

So fret not, Suns fans. All is not lost. Falling to the Spurs may sting (a lot), but it doesn't mean the season is over. The Suns are basically in the same spot they were in before Tuesday's games. In the end, the loss is merely a missed opportunity. There will be plenty more to come, starting today against the Los Angeles Clippers. We're running out of time, however, and the Suns can't afford to miss on many more.

Denver, Minnesota and Utah are also in action tonight, so make sure to cheer on the Toronto Raptors, Charlotte Bobcats and Boston Celtics and hope they can give the Suns a little help.