Well ... we all knew this stretch of games would be tough. But the bad start to the season has the Suns in a tight spot where every game really does matter. We started yesterday 1.5 games back of the 9th ... er 8th ... er 7th spot, and with the loss to the Clips last night we slid to two full games back.

But the good news is that both Utah and Denver lost last night. That continues to give the Suns hope that they can still catch up if they can somehow end their current funky skid and remember how they were playing just a week or so ago. Putting the fate of your playoff appearance in the hands of other teams is not the most enjoyable way to make the playoffs -- we all know that from experience. 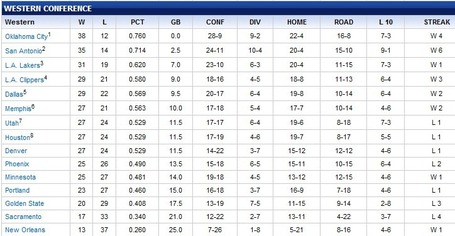 There is a saying by mothers out there that goes, "If you don't have something nice to say, don't say anything at all."

Well, the Nuggets lose to the Raptors 105-96 and get outscored from the 1:46 mark in the 3rd quarter to the game's end 26-11. The Nuggets missed 15 straight shots in the fourth quarter and lose again in embarrassing fashion to a team that is supposed to be inferior, on paper.

Very good news for the Suns - the Denver Nuggets are our first target to surpass.

I have to admit that I had misgivings about this game and whether we had enough healthy bodies to be competitive with the Bobcats. They have a lousy record, but are not mincemeat as they proved tonight. Once they get a bit more talent and a few years of experience, they can be serious competition for anyone! Somehow another spectacular game from the best power forward in the NBA this year, coupled with a point guard had a really solid game, a reserve forward who had a good game, and not much else was enough tonight. Let's hope Beas and Pek and Barea can give us some minutes here soon, the Misfit Toys are looking worse for the wear....

Keep an eye on the T-Wolves ... that Kevin Love is a bad man.

Anyway, Jazz were up by one, then the Ghosts of Boston Garden got all influential, and before you knew it the Jazz were down. And down big. Our boys fought back, but missed free throws and missed opportunities only succeeded in frustrating our players and fans -- and did not help the Jazz leave town with a win.

Eff the Spurs. They still roll.