Only a few games were played in the NBA at all last night, and fewer still affected the Phoenix Suns' playoff hopes. With most teams having off-days, none of the teams directly above the Suns moved in the standings.

With 15 games to play, the Suns are two full games out of the 8th (or really 7th) spot in the Western Conference. Unfortunately, Kevin Love's Timberwolves and dysfunctional Trail Blazers are only 0.5 games and one game behind the Suns, fighting for spots as well.

With the news of Grant Hill's knee surgery and a two-game losing streak in their wake, the Suns players have a choice to make: hang their heads with a month to go, or fight harder than ever to make the playoffs. I expect the latter. The Suns have two more days of practice to figure out their non-Hill game plan, and figure one out they will.

Hit the jump for a bit more banter and a pretty pic of the standings. 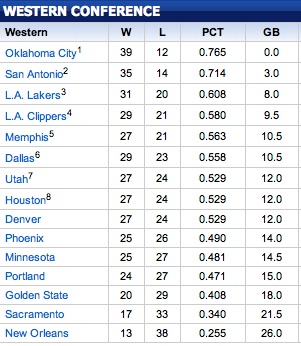 Before you get too bummed, just remember that the Suns played very well after the All-Star break to even get into this discussion. Let's enjoy the playoff hunt while it lasts (hopefully into May).