The Phoenix Suns played well. The Oklahoma City Thunder played better. The result was the same for the Suns as it's been for 17 of 18 other NBA teams that have lost in OKC. There's no shame in that.

This Suns team has had some stinkers of games where they've not played hard or not played smart and on a few occasions both at the same time.

This game was not that. This was a very impressive outing from the Suns.

They played hard and fast and took the game right to the Thunder. They forced OKC to bench a starter, Kendrick Perkins, for almost the entire second half because he couldn't keep up with the pace of the game or the mobility of Marcin Gortat. They made Kevin Durant dig deep in his bag of super star tricks and pull out big shots from his rear end. They got out-talented by James Harden (amazing game, James).

They even needed some "favorable" calls to keep Grant Hill on the bench longer than he would have otherwise been...and I don't think it was a coincidence that Hill was sitting during the entire OKC comeback run.

In the end, it was a very solid effort from the Suns. If they had played this way to start the season they would be in the playoff picture right now and not four-games below .500. If they can continue to play this way -- consistently -- they still have a slim chance.

Enough of that, here's where this game turned: Shannon Brown blew two-straight possessions. First on defense and then on offense.

Is it fair to blame Shannon Brown and two bad possessions for the entire game?

But they were the trigger point for a Thunder comeback that was powered by a 26-5 run spanning about seven minutes at the end of the third and start of the fourth quarters.

Alvin Gentry in his post game comments pointed out this one play as the turning point, so let's start there.

The Suns went to the zone with 4:47 left in the third quarter up 82-68. The Thunder scored just once against the zone in six tried in the second quarter according to mySynergySports.com.

The Suns got two blocks and bad misses on their next four defensive possessions before Durant hit a ridiculous and well defended shot.

As you can see, the Suns set up the zone except Shannon Brown is lost and covering nobody. This forced Jared Dudley to rotate to the ball to help Steve and leaves James Harden WIDE OPEN for a three. 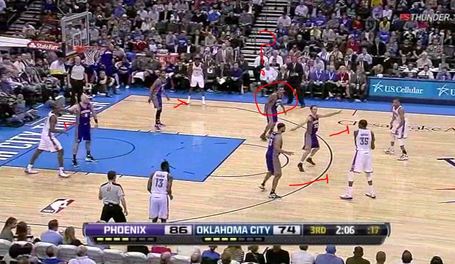 It's pretty obvious that Brown as the left side high man in the zone should have been up with Steve and covering Westbrook which would have allowed Dudley to stay closer to Harden. That didn't happen.

Gentry was livid and called a time out.

Out of the time out, the Thunder blow their defense as well and end up with two guys chasing Nash around screens and no one covering Brown. Shannon cuts to the front of the rim, is wide open, Morris gets him the ball, he travels.

Thunder run a classic zone offense play getting the ball to Durant in the middle of the lane which forces that back line to collapse and leaves Ibaka open for a dunk.

Gortat tries to post up Ibaka and dribbles off his leg.

Suns kill the zone. Durant posts up Dudley and scores.

Nash misses a little turnaround in the lane.

Nash goes under an Ibaka screen and Westbrook nails a three at the top of the arc.

And that's pretty much all she wrote.

Having watched all eight missed threes, only one was well-defended and another was a desperation heave in the final seconds.

The Thunder did what other good teams have done to the Suns late in games -- they went small and rotated well and packed the paint. Phoenix did what you're supposed to do and kicked to the open shooters. The shooters just missed or maybe this is a different game.

Sometimes it just comes down to making shots....and not blowing your defensive assignments in the zone. Sorry Shannon, I know that's not fair.

A view from the other side:

Thunder Crush Suns in Second Half, Win 115-104 (Game #39 Recap) - Welcome to Loud City
The Suns were a great team through three quarters. This game unfolded very similarly to how the Magic game went a week ago, except for the fact that the Suns have superior offensive players. Through three quarters, the Suns played just about perfect offensive basketball. They had 26 assists on 34 made baskets. Steve Nash had the Thunder completely flummoxed; there were times when he would roll off of picks and then just jog into the lane for an easy lay-in and the Thunder had no idea how it happened.