Only a few games of significance to the Suns' playoff hopes were played last night, but the ninth place Utah Jazz lost in L.A. to the Clippers for their third straight defeat, dropping them to even with the Suns in the loss column at 27-26.

The Nuggets and Rockets were off last night, so the Suns remain 2 1/2 games behind both the No. 7 and No. 8 spots.

This sprint of a lockout-shortened season has now entered its final month, with the last day of the regular season coming April 26. The Nuggets and Rockets are both currently playing at a 35.5 win pace. Will the Suns be able to make it to that many? Or will one of those competitors see the wheels fall off for some reason? We' will learn in the next three and a half weeks.

Chris Paul and Blake Griffin get it done, combine for 50 points

Devin Harris had as many assists as CP3 did, but only took 4 shots. He just couldn't keep up. Big Al was Big on offense, netting 26 points, though zero free throw attempts (which sucks, he deserves more than zero). He only had 4 rebounds, which was surprising. Paul had 18 and 9, with 5 assists, but he shot 6/14. He did make up for it somewhat by going 6/6 at the free throw line. The Jazz left 9 points there in this game going 22/31.

As repetitive as it may be, it has to said that in spite of a win, it's concerning that the Grizzlies once again barely beat an inferior opponent. It's especially frustrating that Memphis only won by 4 considering that Monta Ellis, the Bucks' best scorer, went 2-12 for 8 points. Admittedly, Drew Gooden and Ersan Ilyasova both dropped 20 points, but I can live with that when we limit the rest of the team (Note: Brandon Jennings also scored 24, but it was so inefficient that it actually worked in our favor).

Once again, the Grizzlies didn't dominate this game because they couldn't put the ball in the basket. O.J. Mayo, Zach Randolph, and Quincy Pondexter had nice offensive outings and that's it. More than anything else, Mike Conley was sorely missed for his ability to create turnovers and push the ball in transition.

There are plenty of reasons to be disappointed in this game. The Lakers just struggled to beat the New Orleans Hornets ... decimated by (or perhaps aided by, since their goal isn't really success at the moment) injuries ... at home. Kobe's terrible shooting played a big role, but the Lakers as a team were once again slow to loose balls and defensive rotations. The big men both played well (21 and 11 for Gasol, 19 and 10 for Bynum) and Ramon Sessions made the kind of influence that is easily lost if it isn't highlighted - 10 points and 10 assists for Ramon, and just one turnover for the first time as a starter., but the bottom line is that the Lakers were once again out worked and out hustled to many loose balls and rebounds.

Note that the Suns opponents today, the Hornets, battled hard with the Lakers yesterday. We can hope they won't have that type of energy today. 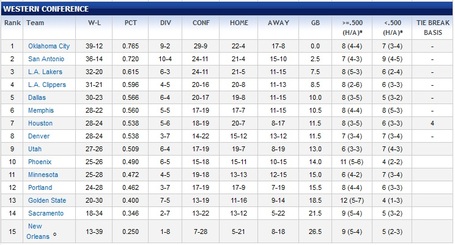