NBA Playoff Standings Update: Both Conferences Coming Down To The Wire

Share All sharing options for: NBA Playoff Standings Update: Both Conferences Coming Down To The Wire

As has been the case more often than not since the Bright Side began tracking the playoff fight in the Western Conference, the Phoenix Suns did not get any help from other teams. Only one of the six games on Tuesday night featured teams in the West, and the result of that game was not the one Suns fans were hoping for.

While most of the Western Conference got the night off, teams in the East were hard at work, many of them in their own playoff race.

Make the jump for Tuesday night's scores, a new nickname for Vince Carter and the most recent playoff standings. 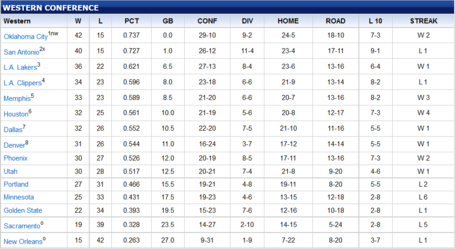 To be honest, tonight, the Mavs survived their warts more than overcame them. It looks good in the box score, but they turned the ball over so much in the first half that you could reasonably be confused who was the point guard for which team. They missed a lot of easy layups and open looks. In all honesty, they probably don’t win this game if the Kings have a center to keep the Mavs off the board. But when you lose to teams like the Cavs and the Hornets you don’t much complain about nights like these.

DeMarcus Cousins' monster 25 point, 18 rebound performance was not enough to give the Suns the help they needed. The Mavericks remain in 7th place in the West and picked up half a game on the Suns.

And now a little bonus coverage from the Mavs' recap:

The highlight of the night, since the Mavericks won, was a Vince Carter dunk attempt that started as a soaring slam from the middle of the pant, turned into a layup halfway through, and ended up on the front rim. Half Man Little Light on Gas These Days.

The first group is Chicago and Miami, the two teams competing for the East's top seed.

The second group includes Indiana, Atlanta, Boston and Orlando. 1.5 games separate the Pacers in third place from the Magic in sixth, with Atlanta and Boston sandwiched between them.

The final group is the one fighting for the 7th and 8th seeds, and it includes Philadelphia, New York and Milwaukee. Two games separate the 76ers in seventh place from the Bucks in ninth. 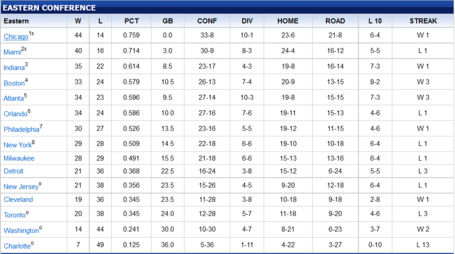 It's really hard to read too much into the game, as the Nets are exactly the type of team the Sixers should feast on, but with recent horrible losses to Washington and Toronto (along with numerous losses to good teams), just playing good basketball and taking care of a team was nice to see.

The 76ers have been struggling mightily as of late, but a few line-up changes and a game against the New Jersey Nets were all it took to get back on track. They'll have to hope the new rotations are enough to hold onto their playoff spot with the Knicks and Bucks breathing down their necks.

One night after performing like a finely tuned offensive machine against Detroit, the Orlando Magic were nowhere near as sharp offensively, as no Magic starter shot over 50% from the field, and the team shot just 36.6% overall. The Washington Wizards took advantage of the absence of Dwight Howard in the middle as Kevin Seraphin had a career night of 24 points on 11 of 16 shooting, 13 rebounds, and 4 blocks in the 93-85 Wizards' victory, which broke a nine-game Magic winning streak over the Wizards.

The Magic have some serious issues and are not playing well at all as the playoffs approach.

LeBron James, Dwyane Wade and the Miami Heat came up short against the Boston Celtics for the second straight time on Tuesday night.

The Celtics handed the Heat their 2nd loss in the last 3 games, lead by 27 points from Paul Pierce and 24 points and 9 rebounds from Kevin Garnett.

With the loss, Miami now stands three games back of Chicago, while the victory for Boston puts the Celtics up three games on Philadelphia in the Atlantic Division.

Well, I guess splitting a home-and-home with Chicago isn't much to complain about, but it was still disappointing to see the Knicks get trampled by a Derrick Rose-less bunch of Bulls. Carmelo Anthony had another excellent scoring game, but like StarksMiddleFinger said in the game thread, the Knicks looked very much like a team without a point guard.

The Knicks better figure out their point guard situation soon. Jeremy Lin has said he probably won't make it back for the first round of the playoffs, and that's IF they even make it. The Knicks play the Bucks tonight on ESPN in a huge game.

Chicago, meanwhile, did just fine without their own point guard and reigning League MVP Derrick Rose. Interesting stat: Kyle Korver led the Bulls with three blocked shots. As Jeff Van Gundy said during the game last night, "You don't take it into the paint on Kyle Korver!"