Western Conference Playoff Update: The Diary of a Debbie-Downer

Share All sharing options for: Western Conference Playoff Update: The Diary of a Debbie-Downer

Well - As you could probably tell from my tone in last night's post game coverage, I feel with the loss last night to the Grizzlies - the Suns have severely damaged their playoff hopes. They now sit two games outside of the playoff picture in the 10th spot in the Western Conference as Utah's win last night over Houston leap-frogs them over the Suns into the 9th position.

There are only 8 games left in the regular season and all of them against quality opponents. You be the judge... I won't lose all hope until they are statistically eliminated but the Suns face the most difficult schedule to finish out the season among WC playoff hopefuls. Add to that the recent struggles of the starting unit and I'm not sure they have enough left in the tank to make a miracle push.

Believe me. I hope I'm wrong. More after the jump.

Here are your Western Conference Standings via NBA.com: 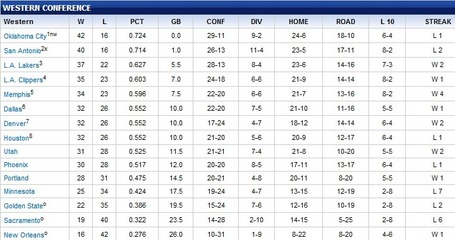 Rudy Gay was being guarded by Jared Dudley because Grant Hill, Phoenix's best perimeter defender, was out with an injury. While Dudley is a decent defender, he can't hope to contain Gay. However, prior to last night's game, Rudy had yet to break the 30-point threshold this season. As of late, the Grizzlies have relied on a balanced attack, would he be aggressive knowing that he could get anything he wanted against his defender? Rudy's line for the night: 32 points (13-20 FG, 6-6 FT), 7 rebounds (4 offensive), 1 assist, 2 steals, 1 block.

Denver probably didn't need to knock out Kevin Love to pick up this win. Nonetheless, it was an important win for Denver, one that moved them into a three-way tie for the final three playoff spots in the West. In Love's absence, Anthony Randolph and Derrick Williams combined for 55 points. I am as terrified as you are. Nuggets win 113-107

On the Eastern Conference side of things... Who cares? Just kidding - if you're that interested check out Tom Ziller's great post at the hub -

NBA Playoff Picture: Do We Have Our 8 In The East? - From Our Editors - SBNation.com
What ramifications did Wednesday's action have on the NBA playoff race?