On a night when the Suns did themselves no good except for giving their starters rest in a blowout loss in San Antonio, they maintained their 9th place standing in the Western Conference due to a 103-98 Utah Jazz loss to the Memphis Grizzlies.

Neither the Rockets or Nuggets, each 1 1/2 games ahead of the Suns after last night's loss, played last night but they play a home and away back to back tonight and tomorrow with the first game at 5PM MST in Denver this evening. Whatever the result of that game, the Suns will gain 1/2 game and only be 1 game back going into tomorrow night's game against Portland.

Given that the Nuggets hold the tie-breaker edge over the Suns on the strength of their 2-0 record against Phoenix so far, with one game remaining between the teams, it would be best if the Nuggets swept the two games.

Over at Denver Stiffs, hey, they want to sweep these two games! Let's be friends, Nuggets. We both make it and the Rockets and Jazz are the odd teams out. Deal?

Rockets Vs. Nuggets preview: Nuggets face biggest back to back of the season

You see, the Nuggets can't afford to lose both. Splitting is also an iffy proposition. Truth be told the Nuggets need to sweep these two games to realistically cement their playoff positioning. Win these two games and you are a full two games up on the Rockets WITH the tie breaker. Split and you are no better off than you are now. Lose both and the playoffs start looking like a mighty grim hope. So ... no pressure right? 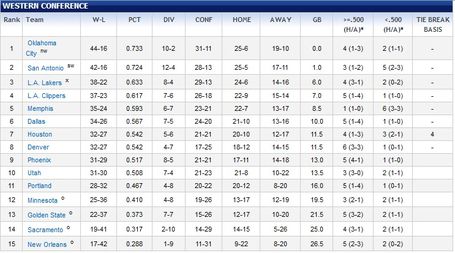