NBA Western Conference Playoff Standings: Enemy Of My Enemy Is My Friend

Share All sharing options for: NBA Western Conference Playoff Standings: Enemy Of My Enemy Is My Friend

Sunday was a good day for the Phoenix Suns. They returned home after playing seven of their last eight games on the road in the span of just 12 days. That included three back-to-backs, just three days off, and six games against playoff teams.

The 5-3 record given those circumstances is impressive and while the the Suns didn't finish the stretch in the money, they certainly didn't hurt their chances either. I'm not sure you could have realistically asked for more.

As for the rest of the West, the Rockets and Nuggets began a back-to-back, home and home series in Denver with a win for George Karl's boys. That dropped the Rockets to just one full game ahead of Phoenix. If Denver can win on Monday on the road and the Suns can beat the depleted Trail Blazers (they better), the eighth seed will belong to the Suns with just a week of games left.

Looking in the rear view mirror, the Utah Jazz are beat up in their back court and have lost their last two games and face the Mavericks on Monday. The Mavericks, by the way, aren't totally secure in the 6th seed either.

Full standings after the jump. 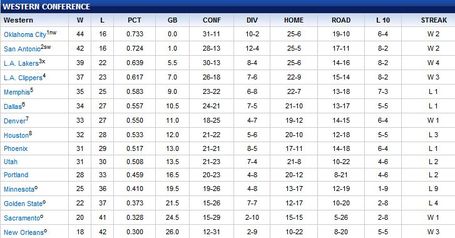 Rockets Vs. Nuggets recap: Nuggets blow out Rockets; on to the rematch - Denver Stiffs
After pretty much lethargically going through the motions in the first half (trailing 49-43) the Nuggets turned on the afterburners in the third quarter ... outscoring the Rockets 37 -19. That's right, the Nuggets dominated a team coming out of the locker room! Hard to believe isn't it?

Mavericks fall to Lakers in OT, 112-108 - Mavs Moneyball
no amount of pondering can erase the fact that Dirk Nowitzki had a piss poor first half and the Lakers were on the receiving end of some pretty meh referee calls. Oh, and the Lakers outscored Dallas in the paint 50-32. SO there's also that. I'm done complaining.