Well, after a fierce night of intense basketball with huge implications in the Western Conference playoffs race, the Suns miraculously are still clinging to the No. 8 seed.

What's that you say? None of the teams the Suns are fighting for a spot with played last night? Oh. So what did happen last night?

Well, there were some games that mattered.

Make the jump for updated standings, my attempt to connect Tuesday night's games to the Suns and a primer for what to watch for tonight.

Western Conference Standings as of Tuesday, April 17 via NBA.com: 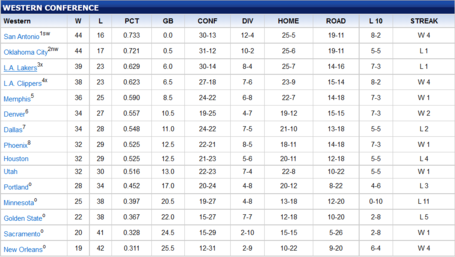 There were not any games that directly affected the Suns, but three playoff teams in the Western Conference did take the floor last night.

Tonight was rough for the Lakers, and for us, but I'd be lying if I said it wasn't expected. The Spurs came out ready to play and vindicate the previous contest, and enough shitty things happened to the purple and gold as to ensure the result. This says no more about the state of these two teams heading into the postseason than the previous contest did.

The win put San Antonio half a game ahead of the Oklahoma City Thunder for first place in the Western Conference. If the Suns can manage to upset the Thunder tonight, that would give the Spurs even more of a cushion, thereby increasing the chances Gregg Popovich rests his starters in the final game of the season against the Suns. Laker misery and help for the Suns? Not a bad result.

It was a nondescript game, yes, but it's just the kind that can sometimes be tough to properly focus in on. The Memphis Grizzlies topped the Minnesota Timberwolves, now shells of their early season selves, in Minneapolis, getting what they needed out of the night -- a win however it came -- with a little extra on the side in the quick return of All-Star Marc Gasol.

The Grizzlies find themselves pretty solidly in the No. 5 seed, two games behind the No. 4 seed Los Angeles Clippers and two games ahead of the No. 6 seed Denver Nuggets.

Marc Gasol is back for the Grizzlies a day after being diagnosed with a bone bruise and listed as day-to-day just yesterday in the Grizzlies' loss to the New Orleans Hornets. Gasol is a key part of the team, and Memphis fans are surely breathing big sighs of relief after the big man did not miss any time with his injury.

It is going to be a busy night in the NBA, and an important one for the Western Conference playoff race.