The NBA Playoffs are on. Just like a good pennant race in baseball, the Phoenix Suns are locked in a playoff-type battle each night as they chase the Utah Jazz, Houston Rockets and Denver Nuggets and try to hold off the trailing Portland Trail Blazers and Minnesota Timberwolves.

On Sunday, the Jazz and Rockets rested while the Nuggets picked up a win over the Orlando Magic. Dwight Howard missed this game due to a back injury suffered when the Mavericks' Brendan Haywood (allegedly) punched him a few times. A butterfly across the world flaps its wings ...

The Rockets helped out the Suns, losing a close one at home against the Pacers -- the same Pacers team that the Suns recently beat on the road. Ha!

That leaves the Suns tied with the Jazz with 26 losses and two games behind Denver with KEY head-to-head games coming against those teams Wednesday and Friday. BIG GAMES.

Here's a look at the standings and key games. 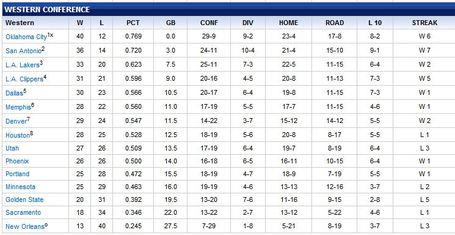 Nuggets at Magic recap: Ty Lawson and Kenneth Faried come up big in win - Denver Stiffs
It's hard to complain about a big win on the road. It doesn't happen that often, and the Nuggets have an over .500 road record at 14-12. Nice eh? Yet, this game was so odd (from the beginning with Dwight Howard not playing) that you come away feeling a big confused and conflicted.

Rockets Fall In Barnburner As Pacers Squeeze Out 104-102 Victory - The Dream Shake
The Rockets found themselves in another barnburner at home with the Indiana Pacers, and after a damn good effort throughout the first four quarters, they suddenly kept missing open shots in overtime and got obliterated on the boards. And that's going to kill you, obviously.

The Houston Rockets (28-25) face the Chicago Bulls on the road. That's a tough one for them. The game will be on NBA TV. Utah is on the road in Portland on Tuesday as well. We'll see if Rip City can do Phoenix a favor. The Clippers are at the Mavericks, but barring a COMPLETE collapse, both of those teams are in.