Share All sharing options for: Winning Time: Suns Vs. Clippers

The Phoenix Suns took the court at U.S. Airways against the Los Angeles Clippers fighting for their playoff lives. A loss would have made securing a playoff spot a long shot, while a win would put them back in 8th place in the Western Conference.

It was a single-digit game throughout the contest, and came down to the final seconds. Considering the struggles the Suns have gone through in fourth quarters this season and the fact that the Clippers were led by Chris Paul, one of the best fourth quarter players in the NBA, Suns fans couldn't help but feel a bit worried. Chris Paul with a one-point lead in the final minutes and the ball in his hands is a scary sight indeed, and the following graphic shows why. 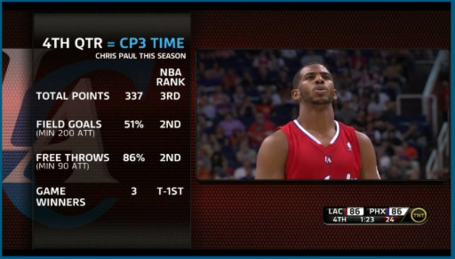 However, in what turned out to be a stroke of genius, Phoenix head coach Alvin Gentry made a defensive substitution down one with 2:2 seconds left in the game, sending in back-up point guard Sebastian Telfair to replace shooting guard Shannon Brown. Steve Nash could not afford to leave the floor as the Suns didn't want to have to burn timeouts to get him back into the game on offense, but Nash attempting to defend Paul most likely would not have ended well for the Suns. So, knowing the Clippers employ a small backcourt themselves, Gentry felt he could play Nash and Telfair together.

Telfair's aggressive brand of defense allowed him to slow down Paul just enough, while Nash -- who had played poorly for most of the game -- kicked it into another gear, recording four points and setting up Jared Dudley for a wide open 3-pointer in the final two minutes.

The two point guards lifted the Suns to a 93-90 victory. Make the jump to see how it happened.

*All screen-caps courtesy of mySynergySports.com

Bassy checked into the game at the 2:21 mark following a Suns turnover by Brown with the Suns down 84-83.

The Clippers got the ball into Paul's hands, and Kenyon Martin proceeded to set multiple screens for him. Paul danced around the screens, running down the clock, before he finally made his move.

Martin wen to set another screen, and Bassy jumped over the top so as not to get caught on it, while Gortat hangs back rather than hedging on the screen. Recognizing this, an with the clock running down, Paul attacked. 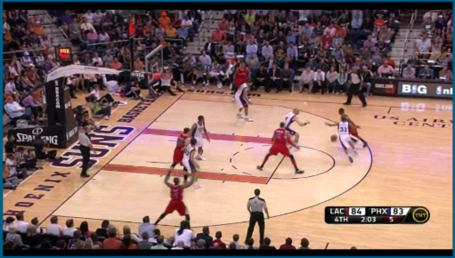 As you can see in the screen-cap above, jumping over the screen put Bassy out of position. At this point, Paul has him beat. But Gortat is still between him and the basket. 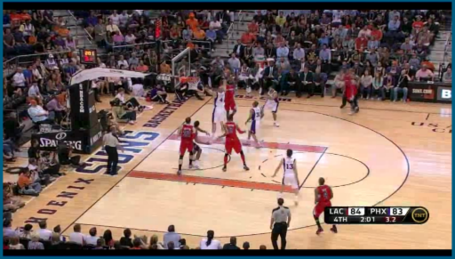 With Gortat protecting the rim and Bassy on his tail, Paul takes a big jump stop to create space and then fades back for the jumpshot, which you can see above.

The defense was not bad by any means and the Clippers ended up with a pretty tough shot, but Paul was just too good on this play. 86-83 Clippers, 1:59 remaining.

The Suns answered with their trademark play, a one-five high pick-and-roll. 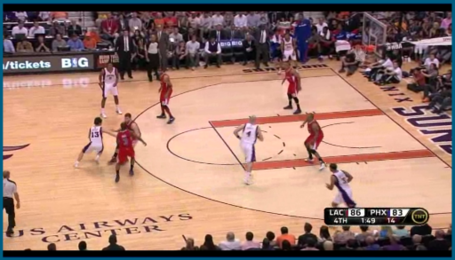 As you can see here, Blake Griffin fails to hedge and instead momentarily doubles Nash, leaving no one on Gortat. Nash goes left and attacks the double off of the screen, taking the defense with him. Gortat rolls hard to the basket and Jared Dudley's defender, Caron Butler, has to leave Dudz and drop down to protect the rim. 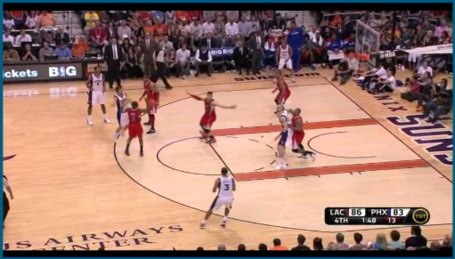 The Clippers had all five defenders on one side of the court, leaving the back side wide open. Dudz rotates up to the wing for the spot-up 3-pointer. 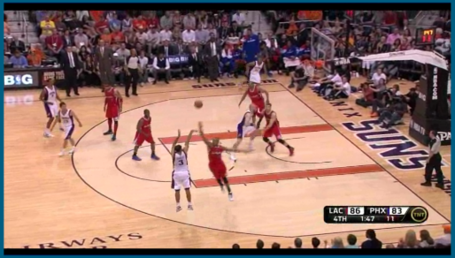 The Clippers, to the surprise of absolutely no one, put the ball in Paul's hands again. Kenyon Martin sets a couple of screens, but Paul chooses not to attack and runs the clock down. He waits for the isolation on Telfair before setting Bassy up, crossing him over and blowing by him. 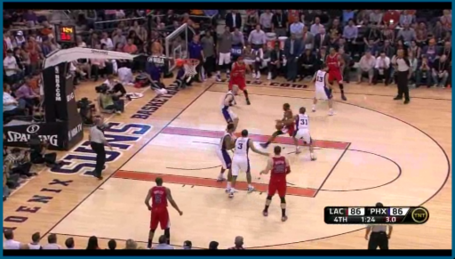 Beat, Bassy tries to reach in and steal the ball from behind, but he's called for the foul, putting Paul at the line for a pair of free throws. He hits both, and the Clippers regain the lead, 88-86, with 1:23 remaining.

The Suns counter with a high screen by Frye for Nash. Frye doesn't get the screen set, but he does enough to allow Steve to get past Paul. 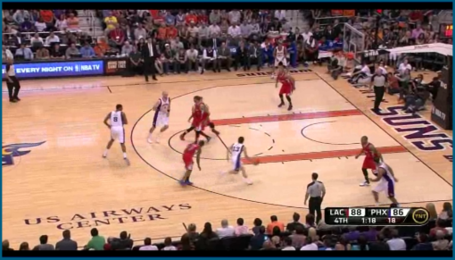 After he gets past Paul, the lane is wide open and Steve takes it all the way to the basket. Griffin is able to recover in time to contest the layup, however. Knowing Griffin is bearing down on him and what an explosive leaper he is, Steve decides to put a little extra air under his layup. 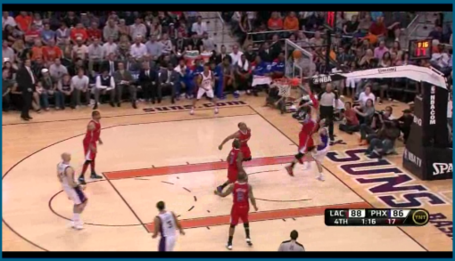 And by a little, I mean that he somehow was able to kiss it off the very top of the backboard. Not even Dwight Howard would have gotten to that one. Game tied at 88-88, 1:15 remaining.

Paul again walks the ball down the court, running down the shot clock. Griffin and Martin each attempt to set a screen for him, but Paul ignores them both. With five seconds left on the clock, Paul puts his head down and tries to get to the basket. Bassy is right with him, though, step for step. 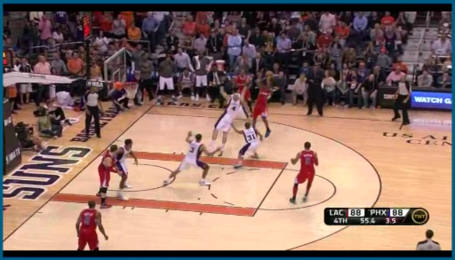 Gortat steps out to help on Paul and Paul has to force an incredibly difficult fade-away with Gortat right in his face. It comes up short, and leads to a a fastbreak opportunity for the Suns.

Gortat sees Bassy is the nearest player to the ball and takes off down the court. Bassy tracks down the board and tosses the ball over the defense to Gortat, who had beat everyone down court. 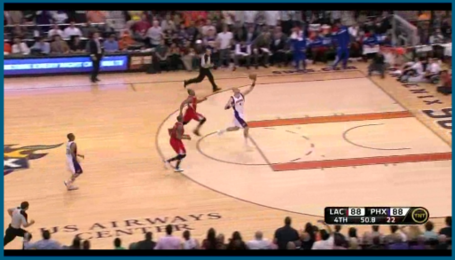 Gortat catches the ball in stride and goes up for what looks like a one-handed dunk attempt. However, Randy Foye was able to chase him down and block the shot. Fortunately for the Suns, a foul was called. Gortat hit one of two free throws to put the Suns up 89-88 with 48.4 seconds left.

As the Clippers are trying to get the ball into Paul's hand, Telfair is playing very aggressive defense. As Paul dribbles toward the top of the key, a foul is called on Telfair. 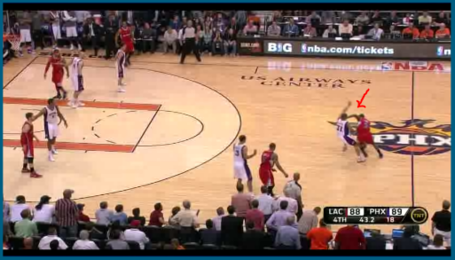 I'll just post this picture and leave it at that. Paul hit both free throws to put the Clippers up 90-89 with 42.5 seconds left.

However, Steve Nash answered for the Suns and drew a foul himself. Both shots were good and the Suns went ahead 91-90 with 25.9 seconds left.

Once again, Paul didn't seem to have any sense of urgency as he took his time and ran down the clock before even heading towards the basket, despite his team being down. Martin set three different screens before Paul decided to attack, but when he did he was able to get past Gortat. 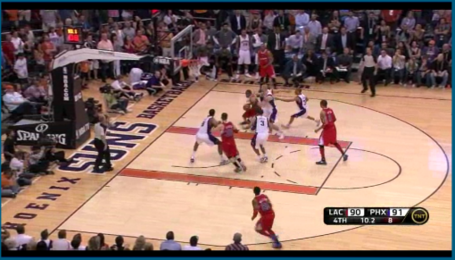 As strong and crafty as Paul is, at this point it appears as if it is going to be a Clipper bucket. But Gortat challenges Paul and forces him to adjust his shot in mid-air, and Telfair comes from behind to send the ball into the first row. 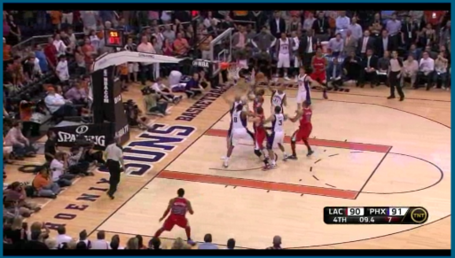 The ball goes out with 7.7 seconds on the game clock and five seconds on the shot clock. The Clippers run a good play and get Mo Williams open at the top of the key, but it rims out and on the rebound a foul is called on Blake Griffin who was fighting for position with Channing Frye.

Frye steps up to the line with just two seconds left in the game, and calmly knocks down both shots to give the Suns a 93-90 lead.

The Clippers set up their desperation play and toss it down court to Griffin, who rises above the three Suns around him to make the catch. 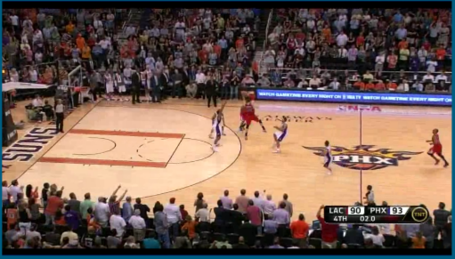 Griffin comes down, spins around, spots up behind the arc ... 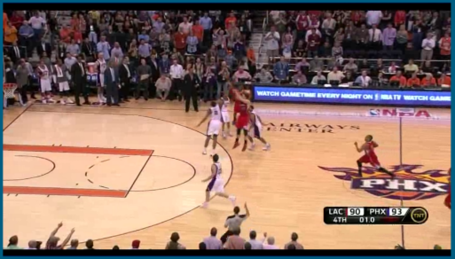 And clanks it off the rim. Game over, Suns win.

This was a heck of a game, a great fourth quarter, and an epic final two minutes. The Suns won this game with their defense down the stretch, and were able to overcome their fourth quarter struggles behind their two point guards, Bassy Telfair on defense and Steve Nash on offense.