It's crazy - This is and will continue to be a wild finish so let's take a look at where we stand today after the jump! 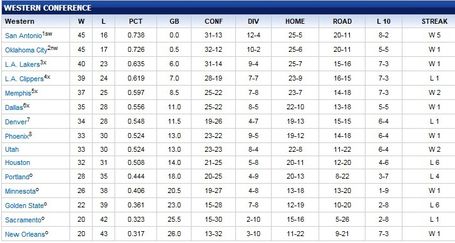 So there we stand in sole possession of 8th place in the West with Utah and Houston right there pressing. The good news for Phoenix Suns fans is that we hold the tie-breaker with both the Utah Jazz and the Houston Rockets. So if we were to end the season in a tie with either (or both) of those teams it would be the Suns who get the nod into the Playoffs!

Let's take a look at what happened last night -

The only game that had any relevance to the Phoenix Suns was the Houston loss last night to the Eric Gordon Hornets. In games where Gordon plays, the Hornets are 6-2... crazy to think where that team could be if they were healthy all season. Anyways - the loss must have been so bad the writers at the Dream Shake drank themselves into a coma because they didn't have a recap up... and the win must have been so good for the writers at the Hive that they drank themselves to sleep and forgot to put one up. So I'm linking a recap by the organization that shall not be named.

Houston Rockets vs. New Orleans Hornets - Recap - April 19, 2012 - ESPN
Goran Dragic scored 23 points and Chase Budinger tied a season-high with 22 points for Houston (32-31), which dropped one game behind Utah (33-30) for the final playoff spot in the Western Conference with three games left.

"A very tough one for us. We needed this one tonight to hopefully try to get back in the playoffs," Budinger said. "This one definitely hurts everybody, hurts our team and hurts our chances. ... You can never give up. There's definitely still hope for us. You've just got to win out and hope that other teams lose."

Games to watch tonight? Watch the San Antonio v. the Lakers game and the OKC Thunder v. the Sacramento Kings games tonight as they (Spurs/Thunder) jockey for the 1st seed in the West - that battle will determine who we end up playing given that we make the playoffs as the eighth seed. You can pretty much write in a win for the Thunder tonight.

Which team would you rather play?