We've got some good news amid the Suns destruction at the hands of the Nuggets: Robin Gibb is out of his coma. Who's Robin Gibb? You've no doubt heard his voice before.

Like Mr. Gibb, the Suns are not dead. Here's how things stand: 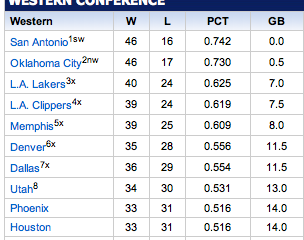 After last night's action, the Rockets are tied with the Suns for 9th, while the Jazz own the 8th outright by a game. These are all the games that mattered to the Suns last night:

SB Nation-Courtney Lee scored 20 points, while Goran Dragic added 18 points and seven assists as the Houston Rockets snapped a six- game slide with a 99-96 win over the Golden State Warriors on Saturday.

SLC Dunk-This Orlando club was out gunned, smaller, and on the road -- but they played with a lot of heart and you gotta give them respect. Their best player is screwing them over, and screwing his own team mates over. Yet they still went out there, played their hearts out, and took us to overtime.

The Suns are still in control of their own destiny, 2 wins over the Jazz and Spurs and they make it in. Period.