NBA Western Conference Playoff Race Update: One For The Money

Share All sharing options for: NBA Western Conference Playoff Race Update: One For The Money

With just a handful of games left on the NBA schedule, the playoff picture in the Western Conference is all but set. The only remaining spot in the May Madness will come down to Tuesday's epic battle between the Utah Jazz and Phoenix Suns. But you knew that.

If the Suns should get past the Jazz, they will still (probably) need to beat the San Antonio Spurs on the final game of the season on Wednesday. Helping the Suns for that game is the Spurs securing the top seed regardless of how they finish their last few games. That means we are highly unlikely to see Tim Duncan, Manu Ginobili and Tony Parker at U.S. Airways Center on Wednesday.

There's also still some seed shuffling possible between the Lakers and Clippers (who cares) and perhaps some other positioning going on with a few other teams.

And while we are all focused on the final playoff spot in the West, there are a lot of teams and their fans looking HARD at the lottery race. Here's an update on the tanking. 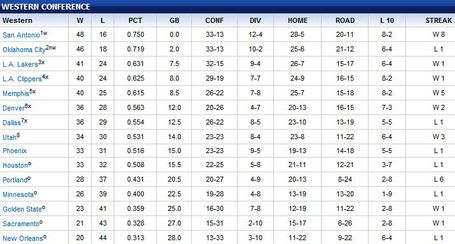 There's only one game that matters today. You know what it is.