Suns Loss To Jazz: By The Pictures (And Some Numbers Too)

Share All sharing options for: Suns Loss To Jazz: By The Pictures (And Some Numbers Too)

It was a pretty close game all things considered. The Phoenix Suns held a two-point lead with about 10 minutes to go and they were down just five points with over four minutes to play. Shots were missed. Mismatches were not exploited. Legs looks tired.

Game over. Season over.

Before we move on to a) the NBA Playoffs as spectators b) draft prep and coverage c) free agency and #NashDecision2012 and eventually d) Vegas Summer League, let's take one last look back at this final game of the season.

(Yes, there is technically a game Wednesday night but it will have all the meaning of a preseason game and will be played with as much less intensity and interest.)

For this final breakdown of the season, we'll look first at the big picture themes of the game and then two key stretches in the fourth quarter where the game was lost.

There will also be plenty of time for reflection, but here's my thoughts on the season as a whole written before Tuesday's loss:

Suns End Season On High Note, Props Must Be Given - Desert Dirt - SB Nation Arizona
In sports, winning matters and closing out the season on a positive note as a competitive team fighting down to the wire for a playoff spot is a far better result than tanking and getting to pick a few spots higher in the draft. So congratulations to the Phoenix Suns on a well played season. Expectations were exceeded and for at least half the year the team was highly entertaining and competitive which is far more than most "experts" predicted.

On to the final breakdown.

He took zero free throws. He was blocked five times. In some cases that's on him for not doing more with the ball, but in others he was simply beat by a bigger, more athletic player like this one where Favors got him from behind. 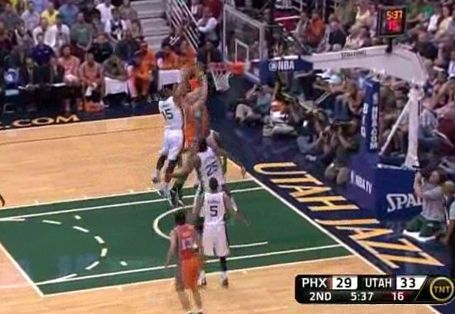 Defensively, Gortat was unable to handle Al Jefferson on his own. It started very early in the game when Jefferson caught the ball in the mid-post about 15 feet from the rim. He easily backed Marcin down into the lane and turned into a simple bucket. 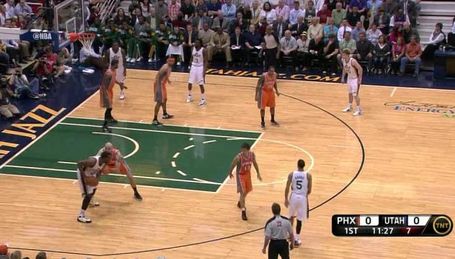 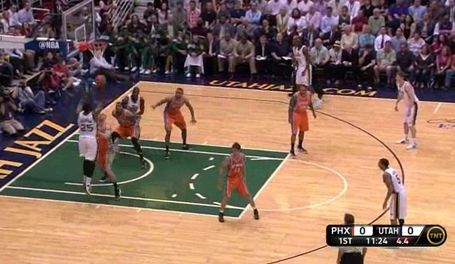 POSTGAME QUOTES: SUNS VS. JAZZ - APRIL 24, 2012 | THE OFFICIAL SITE OF THE PHOENIX SUNS
"I am going to take the blame for that. I should finish stronger just played smarter and make the right decision. I was just rushing everything. My teammates were open on the wing I should have kicked it to the wing make sure they got the shot."

It's no surprise that the pick and roll is the Suns bread and butter and without Channing Frye to keep the defense honest, they were able to collapse and protect the rim from the roll.

As this image shows, the play worked but the player didn't. 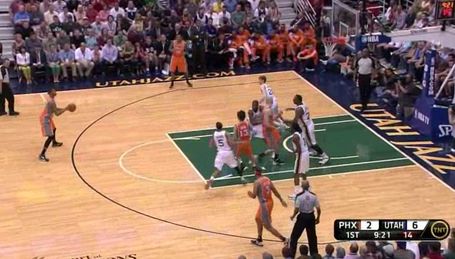 Here's Nash explaining it better than I can:

Phoenix Suns' playoff hopes extinguished
"That was our bread and butter for a while," Nash said of rolls to Gortat, who once led the NBA in field goal percentage. "That hurt a little bit. I don't think it helped the rest of our game. When people have to think about that and protect about that, it opens up other things. When we didn't connect on that as much, it made the game harder for everybody."

Not to "blame" Nash, but it didn't help that his shot wasn't available. Very early in the game he came off a screen and when the defense sagged he missed a shot. Having seen Nash play long enough now, you can tell pretty early in a game when he's "feeling it", which is to say when his body is feeling well enough to make shots. This isn't the same guy who can drop 30 in a playoff game. Those days are gone. He is mortal.

When Nash's own shot isn't there and the shooters aren't keeping the defense honest by hitting threes, the pick and roll is defensible. That's what we saw. And yet despite that, the Suns were very much in this game.

The Jazz beat the Suns on the glass 56-42 and when Paul Millsap played at the three, they were particularly difficult. But as Gentry said, if you play big you open yourself up on the other end and the Suns didn't take advantage (which isn't exactly surprising since that's something they haven't done well all season).

"It's tough but you need to be able to punish them on the other end. Millsap is not accustomed to guarding the three man. Coming off screens and things like that you have to take advantage of that. We never really took advantage of that. So him being in the game on their offensive end becomes problematic because he is a post-up guy he can step outside and shoot jumpers. But then you also have Favors and Jefferson in there so rebounding wise we got really hurt on that."

As we're about to see in the breakdown of two key stretches, the bench had a chance to lift this team as we've seen them do several times over the last month but they didn't get it done. It's hard to fault guys like Shannon Brown (12 points), Michael Redd (15 points) or Sebastian Telfair (5 points) for not doing more, but in this game it was going to take somebody having a heroic night and that didn't happen.

As well as the Jazz played, I don't think they win that game if the Suns have a healthy Grant Hill and Channing Frye. Missing two starters in a big game is a lot to overcome.

At the same time, injuries happen to all teams and the Suns have been pretty lucky on that front this season. If they win a game or two more early in the season when they had all their guys on the floor, Tuesday's loss doesn't matter.

The injuries are an excuse for this one game, but not for the season's result. Missing the playoffs is due to a slow start to the season.

We've seen the Suns bench carry this team and when they took a two-point lead with about 10 minutes to go, it looked like they might do it again. But playing against starters on the road in a big game, the key shots just didn't fall.

Still, the defense was good and they held their own and turned over a four-point deficit when Nash and Gortat game back in the game. Again, it's hard to fault them for not doing more but when you watch this stretch you see:

Telfair missed two shots, Brown missed a shot, Redd and Dudley each missed a three. The only two points scored in this stretch was a layup by Telfair.

We've seen all those guys make big shots. If they get hot and score five or seven points in this stretch, it's possibly a different game.

The Suns clawed their way into a chance to get hot and steal the game, but Nash's inability to score and Gortat's horrible game did them in. Al Jefferson, who only had 18 points in the game but scored 8 points in the 4th, put the dagger in the Suns.

On one end, Big Al abused Gortat in the post with a baseline spin move that resulted in a dunk. That was quickly followed by Gortat missing an opportunity at the rim off a rare pick and roll that worked. Jefferson came back and nailed a 18' jumper in Marcin's face.

In a different world and a different time the Suns would have a chance to overcome a nine-point deficit with 3:40 to go, but not in this game.

Thanks to the Suns and thanks to all you folks. Try not to get too down on missing the playoffs for the second-straight year. This team has given us a lot to cheer for over the decades and over the last few months.

As bad as things look right now, there's plenty of examples of things turning around fast. We'll wait and see what happens next and give Babby and Blanks some room to see what they can do. They are now on the clock.