Share All sharing options for: Phoenix Suns Win Thriller Over Jazz 107-105, Take 9th In West And Reach Two Games Over .500

C.J. Miles almost gave the Jazz the lead with a little over a minute left, and that's as close as it got. Then Frye hit a no-look, turn-around, fallaway 3, followed by Millsap making a layup and getting a steal from Nash with 34.8 seconds left. A frustrated Nash clear-path fouled Millsap, setting up yet another heart-stopping end. Millsap made one of two, pulling the Jazz to within two, and then Jefferson tied it on a long jumper.

Steve Nash grabbed the lead back on a baseline J with 14 seconds left, then Jefferson laid it in to tie the game once again with 9.4 seconds left. Again with the heart palpitations.

Then the Suns almost lost the darn the ball on their final possession until Nash grabbed it and made a leaning runner with 1.7 seconds left to take the lead again! Nash wants this game, yessiree!

The Jazz jacked up a corner 3-pointer that fell short, but Paul Millsap was there for the putback. Fortunately, he was too late as the ball didn't leave his hands before the lights went off and the buzzer sounded. Suns win!

Oh My! This was the best finish I've seen in a long time! YESSSSS!

While Nash and Frye hit the necessary daggers, the Suns' bench mob won this game by building big leads in the second and fourth quarters, only to see the starters give it up when they came back in.

Jump for the standings. Suns in 9th! 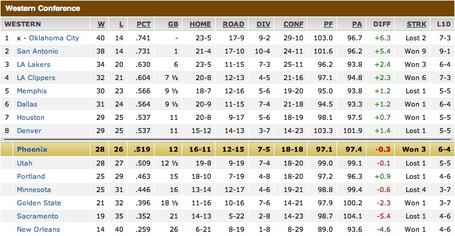