A very slow Thursday for the Western Conference as only one playoff contending team took to the hardwood last night. It was the Los Angeles Clippers (33-22) and they cruised to an easy victory against the shuffling Sacramento Kings (19-36) 93-85.

With their win the Clips pick up a .5 game on the trailing Grizzlies and Mavericks to pad a 2 game lead on the race for home-court advantage in the West. The Suns are 4.5 games out of 4th... FYI.

Other than that it was a bunch of East teams including the Dwight Howard circus that played last night. For updated standings, awesome videos and irresistible links you better continue reading. 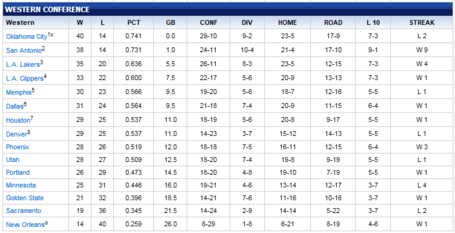 Pretty much the same as yesterday with the small exception of the Clippers gaining that .5. Peep the highlights from last night, videos are always cool - especially on FRIDAY! FRIDAY! ...

Here's a collection of enjoyable reads to get you closer to the weekend the Suns at Nuggets game tonight.

Danilo Gallinari sets Monday as a date for his possible return to the Nuggets' lineup.

The Nuggets concluded their seven-game road trip with another loss to the Western Conference's worst team.

Denver Nuggets hit homestretch needing hot streak - The Denver Post
The Nuggets, Rockets, Suns and Jazz are fighting for the last two spots, all within 1½ games of one another. The Nuggets and Rockets are 1½ games behind Dallas and Memphis for the fifth and six spots in the West. The Suns move into a tie with the Nuggets, who have 12 games left, if they win tonight.

No doubt, the matchup between Nash and Lawson is important. When the two matched up last season, the Nuggets won 116-97 and Lawson had 20 points and 11 rebounds – while Nash was held to only seven points and six turnovers.

Suns' Sebastian Telfair, Michael Redd stepping up off the bench - Coro
"If I'm not aggressive, I'm not helping the team," Telfair said. "I was out there aggravated. I wasn't enjoying myself on the court. I thought about it and watched film. I told myself I was going to be aggressive and have fun and I played a lot better."

Steve Nash is not Dwight Howard: Suns lucky to have point guard - ArizonaSports.com
"I do know that if you start players running your franchise, I don't know where it's ever worked out," he said.

Today in NBA History: April 6 : Court Crusades
On April 6, 1995 Danny Ainge of the Phoenix Suns hit two three-pointers in a victory over the Washington Wizards, making him the third player in NBA history to reach 1,000 career three-pointers.