Living here in Warriors country and having several Warriors fan friends, I keep tabs on the team over at Golden State of Mind. Virtually every front page piece over there for the last few weeks has centered around the idea of tanking. While the Suns would stand to possibly gain a spot or two in the draft by losing more games down the stretch, the Warriors will lose their first rounder altogether if it falls outside of the top 7 after the draft lottery due to a disastrous trade for Marcus Williams in 2008.

It's easy to understand why their fans are enthusiastically embracing the tanking strategy. Would have been nice if they had been tanking when they played the Suns, as they beat us two out of three times after the Suns swept them last season, but at least the Warriors did us a solid by knocking off the Nuggets last night, and have a chance to help us more since they play them again tomorrow.

The Suns currently sit at one game behind the Nuggets' 8th spot, but the Nuggets would hold the tie-breaker since they have already beaten the Suns twice. The Mavericks slipped to 7th after their loss to the Grizzlies, and the Suns are only a game-and-a-half behind them.

Golden State of Mind - Tank in danger: We play these Nuggets again on Monday

On Team's Balanced Scoring:
"They were helping out a lot on me especially in the second half. I don't think I attempted a shot in the third quarter. Guys picked it up for me. Klay (Thompson) hit some shots, (Brandon) Rush hit some shots and I think Dom (Dominic McGuire) played an unbelievable game tonight on both ends like usual. It was an all-around game tonight and I was really really happy with the way the team played."

(On the Standings) "We're now eighth or ninth [ed. note: actually 7th], so we've got to fight. We've got to battle and win some games."

(On the Mavs) "We've all got to play well, I think that’s obvious if we want to do something to make the playoffs or do some damage in the playoffs. We all have to play at a high level. That’s what we did last year, we picked up some momentum, had everybody play well, defense and rebound. On offense, everybody shared the ball and played well together.

(On Lamar Odom's perfomance) "I'm done talking about that."

The Portland Trail Blazers kept up with the high-scoring Bucks for a while, but ran out of energy when Milwaukee got defensive in the second half, eventually losing by a non-representative 22 points. As a fan, this is just one of those losses that you shrug and accept after a big win last night, and move on to the next game. 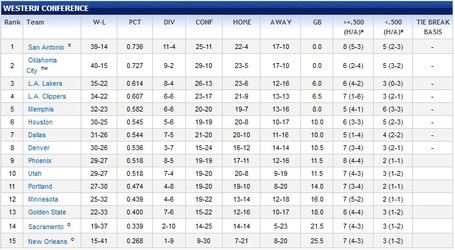