What is going on with the Dallas Mavericks? Suddenly they are just barely in the seventh spot and in real danger of falling out of the playoff race. They've lost four of their last six games and are just one game ahead of the Phoenix Suns in the loss column.

Are the Mavs really catch-able? It's hard to believe, but theoretically possible. Other teams the Suns are chasing are falling back as well except for those pesky Houston Rockets with their pesky little Slovenian Point Guard Who Shan't Be Named (because naming Goran Dragic just dredges up memories or a horrible, horrible trade which, as Paul Coro pointed out, also cost a chance at Jordan Hamilton).

On Sunday, the Rockets took care of the Kings and have Kyle Lowry back. The Jazz fell to the Spurs and get to play them again on Monday. Go Spurs! (ugh).

Last week, the Suns had a tough stretch. They went 3-1 and are seriously pissed they blew that game in Denver. This week is another tough one with the T-Wolves, Grizzlies, Rockets and Spurs. If they go 3-1 again, they will make the playoffs. Book it.

Also, major props to the Arizona Diamondbacks for starting their season with a SWEEP over the S.F. Giants, including another comeback win on Sunday when they battled back from a 6-0 deficit.

Tonight, the Jazz, Nuggets and Rockets are all in action while the Mavs rest. Full standings and recaps of key games after the jump. So like the man said, JUMP!! 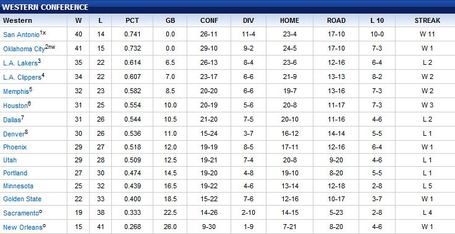 Lowry Returns, Rockets Stumble to Blowout Win In Sacramento - The Dream Shake
Let me repeat, Kyle Lowry is back. Never have I been happier to be wrong about a prognostication. I thought Lowry would miss the rest of the season, yet here he is. He lost 15-20 lbs while he was sick, yet he remains a badass. He looks too thin, though, not enough like an NFL safety. I suggest he visits Voodoo Donuts and orders a few maple and bacon specials when in Portland. It's near the hotel and open all night.

Jazz Vs. Spurs Post Game Thread: Maybe we can doo eet . . . tomorrow? - SLC Dunk
Blech. Where to start? The Spurs shot over 50 fg%, we shot barely 44 fg%. The Spurs shot 43 free throws, and missed only 5. We shot 26 and missed 10. Daniel Green had half as many blocks as our entire team. Tony Parker was too quick. Manu Ginobili was off of his shot, but still went to the line 15 times (that's a month for Al Jefferson). And well, Tim Duncan was still the old master with yet another double double, 3 block, and the win, night against the Jazz.