Here at Bright Side of the Sun we take the words TOTAL COVERAGE pretty dang seriously.

While our beloved Suns are off taking nice vacations, we are still slaving away, attempting to provide you all with first class Suns coverage.

So friends, without further adieu, we present you with the Phoenix Suns Season in Review, 2011-12.

Up for discussion today is Sebastian Telfair.

Let's get this out of the way - I'm giving Sebastian Telfair an A for his final season grade.

Now before you all jump on me in the comments about how ridiculous and out-of-touch I am - let me remind you of my logic. My grading criteria are based on expectations and season performance, plain and simple. Once again Sebastian Telfair is a player on this year's Phoenix Suns team who played above and beyond his expectations during the most critical times of the season. I'm pretty sure when you do that in school you get an A.

I'm not comparing Telfair to Steve Nash or LeBron James - I'm grading Bassy for who Bassy is. Now understanding that - bring the beef in the comments... my body is ready.

Now if you want to see how big trophies, Jay-Z, old poetry and the energizer bunny all relate to Telfair, take the jump and enjoy the ride.

Describing Sebastian Telfair's personality this year brings to vivid imagination the lyrics of this famous poem. If you've never heard it (or at least heard of it) I strongly suggest staying in school.

Out of the night that covers me,

Black as the pit from pole to pole,

I thank whatever gods may be

For my unconquerable soul.

In the fell clutch of circumstance

I have not winced nor cried aloud.

Under the bludgeonings of chance

My head is bloody, but unbowed.

Beyond this place of wrath and tears

Looms but the Horror of the shade,

And yet the menace of the years

Finds and shall find me unafraid.

It matters not how strait the gate,

How charged with punishments the scroll,

I am the master of my fate:

I am the captain of my soul.

But maybe more appropriately, so also do the lyrics of this timeless classic,

Ball so hard, this shit weird

We ain't even s'pose to be here,

Ball so hard, since we here

It's only right that we be fair

Let that work the palate for a second.

What expectations did we have for Telfair when he arrived in Phoenix before the start of the season?

This was his sixth different team in just as many years.

Correct me if I'm wrong but I think they were, try to beat out Zabian Dowdell for the back-up position. Re-read that. As the tides of life provide and retract, a knee injury to Dowdell gave Sebastian a chance - but then came Ronnie Price and yet more challenge was given to Telfair to even have an opportunity to perform here in Phoenix.

He was the 3rd string Point Guard. You tell me what the expectations are for a 3rd string point guard.

He was indeed in the clutches of circumstance - and it was his unconquerable soul that pushed Bassy to stay upbeat and evolve his game during the course of the season.

Like the majority of this Phoenix Suns team, Telfair struggled to open the season in form - something you expect from a 3rd string point guard on a new team, learning a new system, receiving inconsistent minutes, in a shortened lock-out season, oh and not to mention playing behind Steve Nash.

He jockeyed early in the season with Price as Alvin Gentry experimented with line-ups, sometimes he played 6 minutes - other nights 23 minutes, then back to 7 minutes and so on. Despite struggling to find offensive cohesion and offensive consistency on his new team in his opportunities, Telfair was absolutely consistent in one thing from the start. He played with fearless abandon on defense and never gave up.

It didn't matter if the team was being blown out and the final seconds of the game clock were being dribbled away by a smug opposing team - Bassy was still playing as if the game was on the line. When he was on the bench - it was visibly noticeable as a spectator that he was also consistently vocal and impassioned by the game. His heart was in the right place and Alvin Gentry and his coaching staff took note.

The back-up job was solidified for Telfair just before the All-star break and with the consistent minutes and now a known and familiar role Sebastian seized the opportunity and ran with it.

Through April 1, Bassy ranked dead last on the Suns by producing a -0.083 WP48. During the team's final 14 games Telfair shot all the way up to first on the entire team with a 0.212 WP48 that was percentage points ahead of Steve Nash himself!

Telfair took his opportunity and his game and elevated to another level. He nearly single-handedly took control of the weakness that was our second unit and made it one of our strengths with this defensive intensity and improved offensive play. He got under the opposition's skin and his energizer-bunny-like tenacity was contagious for his teammates.

I have a fun exercise for you - take the time to go up to the search bar here at Bright Side of the Sun and type in "Sebastian Telfair" or "Bassy" and just read through the plethora of recaps and posts written as a testament to the contributions he made to this team as they pushed to fight for a playoff spot at season's end.

Without Telfair - the Suns would have no way been in any type of position to compete for that 8th spot.

I remember the game that Alvin put Telfair on Chris Paul in the final seconds of a tightly contested and important game against the Clippers - and Sebastian had proven through the course of the season that what Gentry did was the right move. I had no objection; in fact it made me smile because I believe it was the move that we all had been hoping would be made. Telfair's hustle and effort were unmatched by anyone on the team this year and that's why he was this year's Dan Majerle Hustle Award recipient. 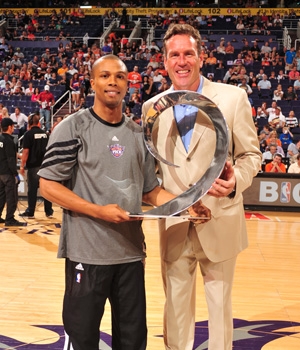 Did anybody guess that at the beginning of the season? No. Telfair went above and beyond his expectations and elevated his team because of it this year, he was the master of his fate and I believe he's earned himself a spot on the 2012-12 Phoenix Suns roster. For 1.5 Mili and some change? I have zero issues with that.

I hope to see Bassy in a Suns uniform again next year.