We here on this blog are all fairly familiar with the players on the Suns' roster. We know what their strengths are. We know how they are used on this team.

We know Marcin Gortat is used primarily as the roll man in the pick-and-roll. We know Channing Frye spots up more than he does anything else. We know Robin Lopez likes to post up.

This is all common knowledge to those of us who watched the Suns play this year. However, this common knowledge wasn't enough for me. I wanted to know more. That's where MySynergySports comes in.

For those of you that don't know, Synergy goes through every game and records the result of every possession. They break possessions down into categories such as isolation, pick-and-roll, and post-up, recording how often players are used in those situations and how successful they are.

There's a lot of information, so I'm breaking it down by offense and defense, and only looking at one position at a time. First up is the center position: Marcin Gortat and Robin Lopez.

In what should be a surprise to absolutely no one, Marcin Gortat was used as the roll man in the pick-and-roll more than anything else. In fact, he was the roll man on nearly one third of his 962 plays. That is a very high number, but it is understandable when you look at how successful he is.

His numbers are fantastic across the board. Gortat scored an incredible 1.22 PPP as the roll man, ranked 11th out of all the qualifying players. He shot 63.6% and was sent to the free-throw line 9.7% of the time (where he only shot 65%, but still). Factoring everything in, he scored 63% of the time when used as the roll man. That's what I call efficient.

A lot of Gortat's success can be attributed to Steve Nash and his incredible powers of distribution, but to say he's nothing without Steve is doing him a disservice. The fact is that he's a tremendous pick-and-roll finisher. He knows how to find the gaps and has a good touch on his finishes around the basket. He may not be Amar'e Stoudemire with his explosive dunks, but he's still one of the best pick-and-roll finishers in the game.

Second on the list with 20.9% of Gortat's plays is cutting. Gortat was decent as a cutter, sporting a 1.13 PPP and a rank of 111. He shot 57.2% and drew fouls 14.4% of the time for a score% of 59.7. This again does require some ability by the cutter, considering he's the one who finds the gaps and puts the ball in the basket, but it also relies heavily on the ones passing him the ball and the others drawing attention and opening up the cutting lanes.

Third on the list is post-ups, which account for 18.6% of his plays. His PPP was .75, ranked 118th. He shot 42.2%, was rarely fouled and turned it over 14% of the time. He scored 38.5% of the time while posting up. Overall, he's decent as a post player, but he still needs a lot of work as we all know. Despite his work with Hakeem "The Dream" Olajuwon, a post-game is not something he can rely on at this point.

Gortat is decent on the offensive glass, but he's not all that effective as a spot-up shooter. His .82 PPP was ranked 233rd, and he only converted his shots 40.7% of the time. He still has some work to do on his jumpshot.

Interesting to note: Gortat only recorded 13 isolation plays all year. He shot 3-10 and got fouled 3 times. He's not exactly a go-to scorer.

Including all plays, Gortat's PPP was 1.05, ranked 18th. He scored 54.4% of the time. These numbers are excellent, but Gortat's pick-and-roll and cutting numbers account for most of this. He is very good at what he does, but we are in trouble if we need him to do more on a consistent basis. 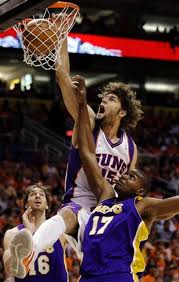 Robin Lopez was featured much less offensively than Gortat was. In fact, he only recorded 368 total plays. Part of this is due to him being a back-up (duh), but I also believe the fact that none of our guards knew how to feed the post early in the season.

Even with the reserve guards' struggles, Lopez was used primarily as a post player, as 36.7% of his plays came in the post. His PPP was .74, good for a rank of 115. However, we've all seen plenty of bricked hooks, and that shows in his shooting percentage of 37.5%. He also turned the ball over in the post more than he was fouled. Overall, he scored at a 40% clip while in the post. 40% doesn't look all that great, but Robin grades out as a pretty average post player. One thing I've discovered while doing the research for this is that post-ups are not a very efficient source of offense all things being considered.

While posting up isn't all that efficient and Robin is little more than average at it, the pick-and-roll is a tremendous source of high-percentage scoring and Robin is pretty good at it. He was only used as the roll man for 53 plays, but he converted 23-33 field goals and was fouled an insanely high 24.5% of the time. He averaged 1.15 PPP, and was ranked 20th. He did turn it over 9.4% of the time though, so his final %score was 66%. His pick-and-roll numbers each of the last two years have been similar. Perhaps he should be used as the roll man more often?

Robin was very good around the basket in other ways as well. He frequently crashed the offensive glass (19.8% of his plays) and his PPP was 1.12, ranked 63. His numbers as a cutter are even better: 1.39 PPP, Rank 54. He drew fouls at a high rate on both play types.

So Robin Lopez is pretty good when he's close to the basket. What about when he steps away from the basket? Well, he doesn't actually do that too often. I don't have his pick-and-pop numbers (those are included with the pick-and-roll numbers I believe), but he was only used as a spot-up shooter on 21 plays. He made six of his 19 shots. So although we've seen Robin hit that mid-range jumper in the past, he wasn't asked to show it very often nor was he very effective when he did this year.

Overall, Lopez finished the season with a .93 PPP, a rank of 145, and a %score of 49.7%. The problem with Robin was his inconsistency. There were many times Robin looked like a complete stiff and did little right offensively. But there were also times he came out like a man possessed and beasted on opposing big men (these games usually came when he was a sporting some kind of hair or headband I believe). All that evens out to around average, which was where Lopez ended up.

Based on the numbers, the Suns had one of the more formidable center duos in the league this year. Marcin Gortat was one of the most efficient scorers in the entire NBA, and when Robin was on he did some very good things. The eye test backs this up.

However, as good as they are as a rotation, the Twin Towers look advocated by many on this blog is not supported by the numbers. Neither one of these guys will make it into the scouting report as spot-up shooters. Robin Lopez is better the closer you get him to the basket, and Marcin Gortat is at his best when he's rolling to the basket and has room to operate in the paint. There is a possibility these two could play together and be effective, but that doesn't appear to be the case at this point in time in this offense.