Earlier I took a look at how Marcin Gortat and Robin Lopez were used on offense by the Suns this year and how effective they were. Now it's time to examine the centers on the other end of the court: defense.

Gortat and Lopez both have pretty good defensive reputations. Make the jump to see if the numbers support this belief.

One thing to keep in mind on these defensive breakdowns is that Synergy does not track help defense. All these numbers relate strictly to individual man defense.

At a listed 6-foot-11 and 240 pounds, Gortat is a bit undersized and at times struggled against some of the league's bigger centers. This has lead many here to question his ability to hold his ground in the post. Looking at the numbers, most teams were not able to take advantage of him too much.

Gortat defended post-ups on 44.7% of his plays, and he gave up 0.77 PPP, which gave him a ranking of 91. He held opponents to only 40% shooting. One are where his size disadvantage might cause him problems is how often he fouls, but that is not played out in the numbers as he only fouled his opponent 6.8% of the time, which equals out to 15 shooting fouls all year. Gortat also forced turnovers 10.9% of the time, which is another check in his favor.

Overall, Gortat gives up points in the post at a 39.4% clip. Gortat is not an elite post defender, but he was still quite good. He holds opponents to a low field goal percentage and doesn't foul very often, and you can't ask much more than that.

Where Gortat's size could be a problem at times, his mobility gives him a real advantage against a lot of opposing big men. After post-ups, Gortat's second-most defended play (24.9%) was spot-up shooting, and he did really well. Gortat's 0.80 PPP was good for a rank of 53 and he held opponents to 39.5% shooting. He even did well closing out all the way to the three-point line, where opponents only converted six of 22 attempts. Spot-up shooters scored 39% of the time against Gortat's defense.

Gortat's mobility is also a plus while defending the pick-and-roll, which he did 14.8% of the time. He gave up 0.96 PPP, which ranked him 69th. Roll men scored against him 49.7% of time (compare this to Gortat's %score on offense, which is 63%). His foul numbers are low here as well.

Overall, Gortat's PPP against was 0.81, good for a rank if 127, and his %Score against was 40.5. Gortat is savvy enough to hold his own in the post and his mobility allows him to close out on spot-up shooters and defend the pick-and-roll quite well. Gortat is not Dwight Howard or Tyson Chandler, but he is a very good defender and his mobility fits our defensive scheme quite well. 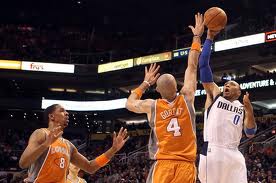 Marcin is pretty good at closing out on shooters.

Where Gortat is a bit small for a center, Robin Lopez is a true seven-footer with some meat on his bones. One would think that his size, strength and length would give him an edge over Gortat in post defense. However, the numbers show them to be almost equally effective. Lopez gives up 0.76 PPP and ranks 78th, both slightly better than Gortat. However, opponents convert at a higher rate against Lopez as his field goal percentage against is 43.5%. He makes up for this by forcing more turnovers (16.5 %TO), though, so his %Score is slightly better at 39.2%.

Lopez isn't as mobile as Gortat though and has more trouble closing out on shooters, as he gave up .96 PPP is spot-up situations with a %Score of 45.8%.

Lopez has seen limited defensive plays on other play types as his isolation and pick-and-roll roll man totals combined are only 45, but he did well on both, holding opponents' %Score to roughly 36%.

As was the case on offense, the numbers point to Gortat and Lopez being a pretty good defensive duo. Both are plus defenders overall and each have their strengths. Gortat's mobility gives him an edge while closing out on shooters and defending the pick-and-roll, and he can hold his own in the post. Lopez's size is also an asset and having him means we don't have much of a drop-off defensively when Gortat takes a seat.

One interesting thing to note is how much more Gortat is used in the pick-and-roll versus the centers he plays against. I suppose that feeds into the thought that Gortat would be better at PF. But he's doing just fine at center for the Suns.

The Suns have a decision to make with Robin Lopez. His overall numbers are pretty good, especially for a back-up, and we've seen him play even better than his final numbers indicate. Having a seven-footer with some ability is nice, but how much is that advantage worth? We'll see this offseason.