I've previously taken a look at the two centers on the Suns on both offense and defense. Now it's time to move on to the power forwards, and we'll begin again with offense.

Both Channing Frye and Markieff Morris had difficult years on the offensive end. Despite that, however, they still had their strengths and provided value to the offense.

I'm not going to give Hakim Warrick a full breakdown here because I don't feel like it is worth it, but for those that are interested he was good in the post but either sucked or barely contributed everywhere else.

Now, make the jump for a look at the two men that made up the regular rotation at the four this year. 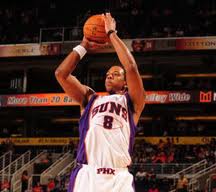 Channing Frye is known primarily as a spot-up shooter. His ability to stretch the floor is how he makes his money, and it’s what makes him so valuable in the Suns’ offense. However, as we all saw, he wasn’t very good at it last year.

Frye also has a reputation as an incompetent post player, but the numbers do not support that assessment. 88 of Frye’s possessions came in the post, a distant second to his spot-up total. On those post touches, he averages 0.99 PPP, good for a rank of 14 overall. He shot 54% in the post and drew a foul on another 9%. However, he did cough the ball up pretty often (17 %TO). Overall, Frye scored 50% of the time in the post, which is a great number. We have to remember, though, that he has a smaller sample size than a lot of other post players, and many (I’d go so far as to say most) of his touches have come when Frye has a smaller player switched onto him. But still, he really was a bad post player in 2009-10, and he's made great strides in the last two years.

Frye also saw 64 possessions while running off of screens, which is not a commonly used play for your typical power forward. It wasn’t a terribly effective play as his PPP was 0.67 and he only shot 30%, but that 0.6 was still good enough for 110th in the rankings.

Channing was also a threat in the open court, as he got the ball on 62 plays in transition. He scored 1.35 PPP which ranked him 24th, and he converted on 56.6% of his attempts. Overall he scored 58.1% of the time in transition.

Aided by his 3-point shooting, Frye’s overall PPP was 0.95 and he was ranked 114th despite his %Score only being 40.7%. So even in a poor shooting year Frye was still able to provide plenty of value to the Suns’ offense. He spaced the floor, scored in the post when he had an advantage and ran the floor hard. But looking back, Frye's 3-point range really makes him a valuable weapon for this offense. In 2009-10, his overall PPP was 107, ranked 19th. Last season, he was at a 1.05 PPP and ranked 36th. If he can find that stroke again, he'll be just fine. 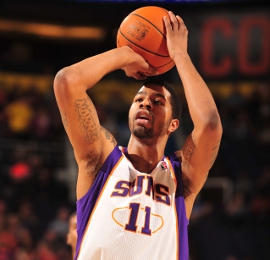 Markieff Morris was similar to Channing Frye in his versatility and the way he was used in the offense, but his inconsistency really hurt his overall numbers.

Morris was actually better than Frye in spot-up shooting. The rookie spotted up on 26.6% of his plays and finished with a PPP of 1.01 and a rank of 106. He only shot 38.9% from the field, although over 60% of his attempts were from beyond the arc where he shot 40.2%. 40% from 3-point range is a very good number, but unfortunately, it seems like most of those makes came in the first half of the season. Overall he scored on 39.6% of his spot-up opportunities, which was better than what Frye did this year.

Morris was used as the roll man on 46 plays, and did quite well with a PPP of 1.09 and a rank of 31. That number is alittle skewed however by his limited sample size and the six 3-pointers he hit (out of 19 attempts). He only made 14 of his 32 attempts overall. He did draw fouls at a decent rate (15.2 %SF or seven total trips to the line), but he also turned it over five times. His %Score was 47.8%, better than Frye but not close to the two centers. These numbers tell me he probably provides more value as a pick-and-pop man than a pick-and-roll man.

Overall, Morris finished with a 0.87 PPP ad a rank of 252, scoring 40.4% of the time. As a rookie, Markieff Morris was a jack-of-all-trades but a master of none. He showed ability in a lot of different areas, but he still has a lot of work to do. Most importantly, he needs to learn how to finish plays at a much higher rate.

The Suns have a pretty versatile pair of power forwards. They are both capable of stretching the floor and knocking down perimeter shots, but they are also able to step in the paint and make some things happen. However, the Suns will need much more from these two next year. They have to shoot better, plain and simple. The Suns can't afford to have them fail to connect at the rate they did this year.

I have faith in Channing Frye getting up plenty of shots this summer and returning to form, and Markieff Morris strikes me as the kind of guy who is going to put in the work to get better. Both of these guys should be valuable contributors next season, whether we bring in another power forward or not.

I'll leave you with this. I have no clue what type of play this happened on and I don't care. Enjoy. 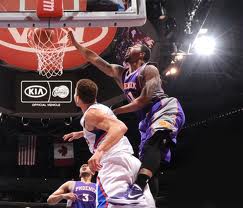