The voting for the NBA's Most Improved Player award was revealed yesterday, and Ryan Anderson of the Orlando Magic took home the hardware with 33 first place votes and 260 points overall.

Ryan Anderson posted career highs in points (16.1 ppg), rebounding (7.7 rpg), field goal percentage (43.9 percent) and free throw percentage (87.7 percent) and also lead the league in 3-pointers made (166) and attempted (422). Those numbers are up from 10.6 ppg, 5.5 rpg, 43 percent from the field and 81.2 percent from the line. Anderson also started every game he played in after last season's starter at the power forward spot, Brandon Bass, was traded to Boston. With the new role came a bump in minutes, from 22.1 mpg last season to 32.1 this year.

Full results can be found after the jump.

Here is a table showing how the votes shook out, courtesy of NBA.com. 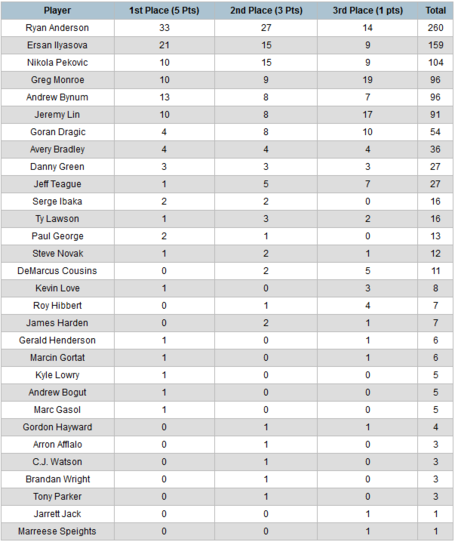 As you can see in the table, Suns center Marcin Gortat finished tied for 19th place after receiving one first place vote and one third place vote for a total of 6 points.

I do not have a problem with Gortat not winning it, but 19th place? Only two people voted for him? Gortat had a much stronger case than that.

Gortat also put up career highs in scoring at 15.4 ppg, rebounding at 10 rpg and minutes at 32 mpg. Those numbers are up from 10.2 ppg, 7.9 rpg and 25.4 mpg. Everyone here saw him elevate his game this year to become the Suns leading scorer and rebounder. He became much more comfortable and effective in the pick-and-role in his first full season as the starter in Phoenix.

Gortat slowed down later in the season and that hurts his argument. But I don't believe there are 18 players more deserving than the Polish Machine/Hammer.

The voters obviously have a different set of criteria for this award than I do.

For example, only in rare occasions would I give it to a second-year player. If a player doesn't improve from his rookie to sophomore year, then there is a problem. They are supposed to improve. So while Greg Monroe, DeMarcus Cousins, and Paul George are very good players and have certainly improved, I would not vote for them for this particular award.

Nikola Pekovic and Jeremy Lin both qualify as the rare cases I mentioned, but both players arguments are hurt by injuries. Pekovic only played 47 games, and Lin 35. That is not enough for me to give you my first place vote.

Avery Bradley gets a double strike for me, as he fits the sophomore disqualifier, plus he didn't even enter the national spotlight until the last month of the season when Ray Allen went down. If it is an in-season award, than our own Sebastian Telfair deserves plenty of votes.

Steve Novak would not get a vote for me either. His numbers are only slightly up and he's basically the same player he always has been: a 3-poin shooter. He just found a situation with a shallow roster and a team didn't care that all he did was shoot.

Roy Hibbert doesn't fit the mold of someone who made a big jump from one season to the next at all. He's made steady improvement each year he's been in the league, and his point an rebounds are only up slightly this year compared to last.

In my opinion, Gortat has a much stronger case than most of the players I listed, and he's right there with several other players that finished higher than him.

What do you guys think? Did Gortat get robbed here? What are your criteria for the Most Improved Player?