Here at Bright Side of the Sun we take the words TOTAL COVERAGE pretty dang seriously.

While our beloved Suns are off taking nice vacations, we are still slaving away, attempting to provide you all with first class Suns coverage.

So friends, without further adieu, we present you with the Phoenix SunsSeason in Review, 2011-12.

Up for discussion today is Michael Redd.

Man, Michael Redd. What an amazing story right? Let's be clear from the start, to give a fair evaluation we should first acknowledge what the expectations were. Jump it and I swear you'll get a gackle out of what was said when the Suns signed Redd late December. Jump it fools!

You know the expectations were low when as recently as last month you have stories like this floating around - I laughed because if he weren't playing for the Suns I would probably be in the same position.

'He's Still In The League?!': The NBA Game Within The Game - SBNation.com
A couple of weeks ago, I saw Michael Redd and Sebastian Telfair playing for the Phoenix Suns. I had no clue either of them was still in the NBA, let alone logging quality minutes

But let's back up and see what Seth the prognosticator wrote in his news blurb on Dec. 29th, 2011 circa the signing of Redd -

Michael Redd Coming To The Suns, Is He The Answer? - Bright Side Of The Sun
It's a low risk move for the Suns (assuming they sign him to a one-year minimum deal) with the potential for high return should Redd be able to recapture his prior scoring magic. In other words, why not give Redd a chance?

And let's just refresh our brains and reminisce on how the majority of us felt. Oh you can't remember? Let me help 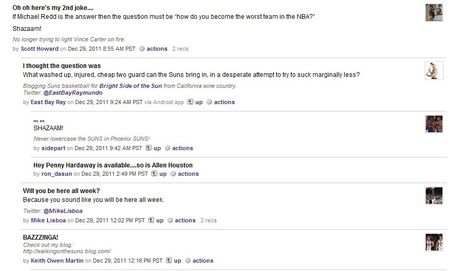 Not trying to call anyone out - just pointing out the general mood, look I'll include my comment as well,

Now let's get a little technical.

This Season Redd played in 51 games.

Now granted - did he play as many minutes as he's been accustomed to over his career? Not even close, but was his production on the same par? It slowly trended upward as the season progressed and all signs would point to a return to near his career averages performance-wise given his health continues to strengthen.

His scoring production this year was almost near his 20pt mo - and that's a huge positive. Sure his shooting percentages all around were down on the year but you all witnessed what I witnessed. Michael Redd made a difference on this team when he was in. But I won't get carried away - it was a gradual positive. Despite scoring 12 points in his debut with the Suns on 01/12/12, he got off to a slow start showing obvious signs that he wasn't quite in shape to compete at the NBA level and that his confidence was not quite all there yet.

Then Boom. He was feeling healthy and the gradual improvement began. You could tell often when Redd came into the game that his confidence was back and he was feeling comfortable. He would take control of the second unit and turn the momentum in favor of the Suns with his crafty left-handed drives and twitchy post-ups in the paint, his quick release on the perimeter was also an asset as he contributed heartily off the bench. Let's take a look at an example.

Now if there has to be a negative in an evaluation for a guy of whom not much was expected - it would be his defense. Something we already knew wasn't his forte and could only be negatively amplified due to his lack of mobility in recovery. And guess what, Redd had the worst defensive rating on the team with 111. But that shouldn't surprise anyone.

I thought as the season wore on and Redd recovered some of his wind that his defensive effort improved as well, I can only venture on to propose that with an offseason of healthy training under his belt and the tutelage of Grant Hill and Elston Turner his defense could improve next year. But do we need him to be Grant Hill? Or do we need him more to be the missing scoring threat off the bench that we've been curmudgeoning around for and summoning through mystical commentations in rosterbation threads for the last few years? (I might have invented a few words in that sentence) Maybe the more immediate and applicable question to our current situation is, do we want him back next year at all?

Michael Redd has said he wants to be back.

If there ever was anything to doubt about Redd's situation going forward - I think it would be his continued health more than his improvement defensively, but I know better to doubt Aaron Nelson and the Suns training staff. Redd is only 32 years old and if he stays in Phoenix i can see many productive years in his future as a scoring threat off the bench. But enough about the future - let's get back to evaluating his immediate past.

So we've established that nothing was really expected from Redd this year with Phoenix right? Or maybe that we expected he might recover a bit from our medical staff and contribute some bench scoring? Well based on that criteria he passed with flying colors and exceeded everyone's expectations by playing in 51 games (of a shortened season remember) and nearly averaging double-digit scoring. His improvement trajectory is on the rise and because of all that I give Mike Redd a solid -

It's not an A because he still stunk often defensively and had a slow (expected) start.

Am I being fair? Too harsh? Too kind? What are your thoughts?