Make the jump for breakdowns of the geriatric duo that played most of their minutes at the three for the Suns this year: Grant Hill and Michael Redd. I'll also toss in a brief word or two on Josh Childress.

Grant Hill struggled this year. We all saw it. He had knee surgery during the offseason and didn't have time to fully recover before the season started and he had to suit up. He struggled mightily during the first couple months before he finally found his legs. While he really picked it up in March, averaging 12.4 ppg on .521 shooting, it wasn't enough to make up for the bad start.

Hill's next most common play, and the only other play type of which he has over 100 plays recorded, is in transition. The days of Seven Seconds Or Less are gone and the Suns don't run nearly as much as they used to, in no small part due to a lack of players who can get out and run. Grant Hill is not one of those players, however. He scored 1.29 PPP on the break, good for a rank of 56, and shot 66.7%. At 39 years old. On a bad knee.

Hill was also effective in his 60 post-ups with a PPP of 0.95 and a rank of 26. He shot 44.2% and factoring in the fouls he drew his %Score was 50%. Grant is great at posting up when he has a size or strength advantage over his defender an finishing the play with a bucket or a trip to the line.

This Sun roster does not have a lot of wings adept at creating their own shot off the dribble. In other words, there aren't very many isolation players on this team. However, Grant Hill is a player many see as having that capability. He was pretty decent at it in 2009-10, and adequate last season.

However, he was only has 52 iso plays recorded this year, and he was pretty terrible. 0.55 PPP, rank 206 (which shows just how inefficient iso play is), 28.8 %Score. Hill, someone normally capable of bailing his team out, just didn't have it this year.He was also ineffective as a pick-and-roll ball handler.

Overall, Hill's PPP was 0.87 and he ranked 280th. This number is heavily weighted by his poor spot-up shooting, however, and as shown above he wasn't useless offensively. It appears as if Hill's jumpshot was his problem. He was fine -- and actually very effective -- when working closer to the basket while posting up or finishing in transition. But because his isolation game consists mostly of pull-up jumpers and he was asked to spot up so often, his shooting problems tanked much of his value to the team on offense. Due to his resurgence in March and the fact that he still shot 45% from mid-range (up from 40% last season) despite his struggles, leads me to believe the knee problems were the source of his struggles. A healthy Grant Hill in 2012-13 should be just fine on offense. 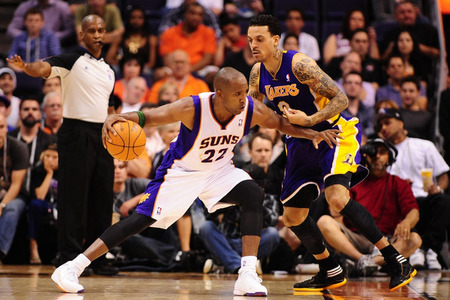 Michael Redd, the best post player on the Suns roster this year?

Michael Redd was brought in as a low risk signing with a potentially big return. After missing most of the last two years with knee injuries, the former All-Star was just looking to get back on the court and prove he can still play. The Suns gave him that chance, an while he didn't return to his 20-point-per-game form, he did provide a valuable (if a bit inconsistent) offensive spark off the bench.

Redd was a pretty versatile scorer, but his most common play was running off screens, which he did on over one-fifth of his plays (or 95 times). Redd scored .080 PPP and ranked 80th, although his percentages aren't all that great (37.6 FG%, 25% 3FG%).

Redd also spotted up on 90 plays, where he actually shot worse overall. That is perhaps due to most of his attempts being from behind the 3-point line (26-73 from deep, 28-84 overall). Due to the high number of 3-point shots, he averaged .98 PPP and ranked 129th. Redd had a reputation as a big time shooter back in the day, but he struggled with his shot for most of the year.

However, even without a reliable jumper, the crafty veteran was able to make his presence felt offensively. He was terrific while posting up, with a 1.18 PPP on 67 attempts, which ranked him 3rd overall. He shot 53.3% and drew a shooting foul 26.9% of the time, giving him a 59.7 %Score, by far his best number.

Based on his offensive production, Redd was a pretty good signing, all things being considered. He put up a 0.95 PPP, mostly with a second unit that struggled to score at times. That ranked him 129th overall. He only shot 40% from the field and 31.3% from 3-point range, but he did manage to draw fouls 8.9% of the time, which bumped his %Score up to 42.5%.

Grant Hill was not himself this year. He struggled mightily with his jumper and the Suns' offense struggled as a result. But at 39 years old, he was still effective in the post and on the break, so the issues look to be due more to the knee problems and lack of offseason than him being too old to get it done.

Michael Redd also turned out to be a nice surprise. It took him a while to get back in shape, and he wasn't terribly consistent, but he did provide an offensive punch to a second unit that was lacking in capable scorers for much of the season.

Even Josh Childress was effective offensively, when he actually decided to take a shot. He was great in transition and as a cutter, Unfortunately, he only shot 6-29 and 4-23 from 3 as a spot-up shooter, which just isn't going to get the job done an explains why he only recorded 108 plays on offense.