I had lunch with Phoenix Suns general manager Lance Blanks on Monday. We sat down, broke some bread, drank some tea, and chatted about the up-coming 2012 NBA Draft. He seemed to be in a good mood. He was well prepared. He talked in long and full sentences, disproving some rumors that he's actually a ghost. Folks, one thing I can testify to with 100 percent certainty is this: Lance Blanks is not a ghost.

As for what Lance shared with me (and about 20 other people from the local media including Kris Habbas from SB Nation Arizona who you should get to know since he'll be doing a lot of Suns coverage after I leave Arizona this summer), here are the highlights:

-- Lance sees this draft as solid all the way through the first half. He described last year's draft as "spotty" with some hit and miss type players (except for Markieff Morris who Lance feels will prove to be worth more than a 13th pick and exceeded expectations as a rookie). This year he thinks there will be good players available all the way through the lottery but they may take a year or two or three to prove themselves in the league.

-- On the Best Available vs. Need question, he said: "All things being equal you go with a need for the team. You owe that to the fans, the organization, the ownership, and the coach to fill that need. Whenever there is an opportunity to fill a need you want to take advantage of it."

-- He left the door open, of course, if someone ranked much higher unexpectedly fell, but since Anthony Davis isn't likely to make it past the opening five minutes of the draft, I would think we will see the Suns draft a perimeter player.

-- "You look at our roster, this year we feel that our perimeter is an area that we'd like to add a little bit of youth to, whether it be one (point guard) the two (shooting guard) or the three (small forward)."

-- It's possible the Suns could look to acquire another pick but it doesn't sound like a top priority. Blanks emphasized the strong likelihood of keeping this (13th) pick.

-- Lance and the entire scouting staff are meeting in Chicago this week. They will have a meeting of the minds and then start looking at players at the Chicago Combine.

-- The Suns haven't had any players in for workouts yet. Other teams have.

-- It's not totally clear, but it sounds like the Suns won't let media in for draft prospect workouts as had been the case in past years. We used to be able to interview players and get some quick feedback from the coaching staff or front office. This helped us help you get to know the possible players before the draft, but now the Suns will instead (I think) only hold a formal press conference at some point before the draft.

So, that's what Blanks said. Are you excited yet?

Oh, and I did find a picture of Lance. He still looks just like this: 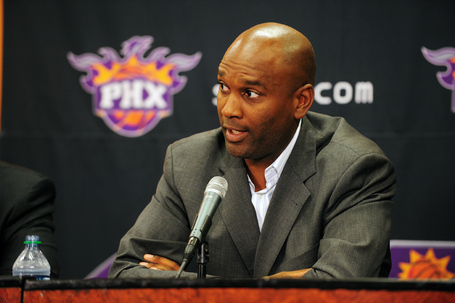