Farewell To The 'Fro: The Josh Childress Story

Share All sharing options for: Farewell To The 'Fro: The Josh Childress Story

Before we fully realized he was here, he was gone.

Josh Childress, one of the first players signed by the new regime of Suns front office brass, was amnestied by the same group of men who brought him in after two seasons of limited playing time and a lack of a clear-cut role.

Upon his return from a two-year stint in Europe, the former Hawks' Sixth Man of the Year candidate returned and came to Phoenix on a five-year, $33.5 million sign-and-trade deal with Atlanta. The signing was perhaps to shore up the Suns' bench with a proven defender with a high basketball IQ — or in other words, a Shawn Marion-lite.

Unfortunately for both Childress and the Suns, it didn't work out that way.

To many, the move didn't make much sense — and perhaps rightfully so — but Josh Childress is one of most quietly professional athletes in this league, and he should be rightfully recognized as such.

But enough of the backstory. Before we begin, I should let you know that this is more than just a farewell. This is the story of how a benchwarmer burrowed his way into the heart of a reporter — perhaps for good. 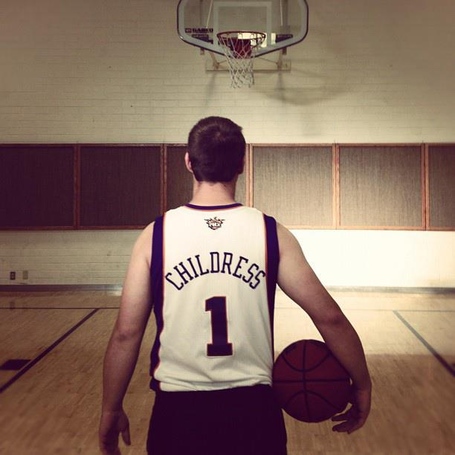 The sun may have already set in Phoenix for Josh Childress, but for this reporter, he won't be forgotten.

We'll start from the beginning. I've been a fan of basketball since the ripe old age of six, when the Suns were giving their best to try and pry an NBA title from Jordan's Bulls. When KJ, Thunder Dan and Charles Barkley were among the most impersonated players on the playground courts of my elementary school. When being a basketball fan in Phoenix was something you could be proud of.

Naturally, because my obsession with the sport started at such a young age, I needed more to satiate my hunger for the game, especially as I got older. I began to follow the Arizona State Sun Devils, only to begin to hate the Arizona Wildcats for being so much better than my hometown team. I started watching NBA games of teams I had never heard of, and started hating other teams who "stole" players from my beloved Suns. (Sorry, Houston and Miami. I know it's not your fault, but I can't stand you. For totally and completely childish reasons.)

In my high school years, I began to follow Pac-10 basketball more closely as my interest in the sport continued to grow. It was during this time when Josh Childress first caught my eye at Stanford. I won't lie to you and tell you I've been a fan ever since. Instead, the name simply became a bit more familiar to me.

After his first few years in the league, Childress' name began to gain a bit more traction in the league. Perhaps it was the throwback hairstyle — his signature 'fro — or the fact that he had become one of the better bench players in the league. Then, just when the interest in Childress began to reach its peak, he bolted to Greece to play with the Euroleague club Olimpiacos Piraeus.

Two years later, after he had been largely forgotten by the NBA community, he returned and the Suns announced their plans to sign him. As a reporter, I was able to attend his introductory press conference and listen to his plans for the future as a member of the team and what he learned abroad.

It might be because this press conference was the first of this nature that I attended, but I instantly felt that Childress would become a regular part of the team I've rooted for since I was young.

However, in the first few months of the 2010-11 season, Childress' presence on the court wasn't exactly overwhelming. The doubters that called the signing a mistake because of his shooting deficiencies were sitting high and mighty on their throne. Still, Childress remained a consummate professional. Despite his playing time, he was still one of the most noticeably energetic players on the court when he got the time. He gave his all for his team, regardless of how many minutes he actually saw real game time.

It was at this point when I began to gain a true respect for Childress. He seemed to be the complete opposite of the superstar diva mentality the league has grown accustomed to over the past decade. I even asserted myself as the pseudo-leader of the #FreeChilly movement on various social media platforms.

As a side note in my Chilly fandom journey, the Suns had a promotion at a O'Reilly Auto Parts in Gilbert, Ariz., where I won a shooting contest and was given the choice between receiving an autograhped Childress or an autographed Hedo Turkoglu jersey. The choice was simple.

After a disappointing 2010-11 campaign that saw the Suns mired in mediocrity, the door seemed to open a bit for the then 28-year-old swingman. In a season where the Suns' true identity seemed to be in question, there was a glimpse of hope for more playing time for Childress.

Instead, we saw more of the same.

Still, Childress remained upbeat. His overall impact on the game may have been slight, but it was the energy he brought to the court night in and night out that made me truly respect the man.

Even upon hearing news of his departure, he tweeted, "Thank you to the Phoenix Suns organization, my teammates and the great fans. I appreciate everything. God Bless!"

While the #FreeChilly movement had seemed to reach its end — albeit not in the way I nor anyone else intended — there is still plenty to take away from "The Childress Era," though no one will remember it as such. We learned that there are still athletes who don't need the spotlight to contribute. We saw a man who had hopes of consistent playing time ride the pine — and still continue to support his teammates in any way possible.

So, I beckon you to raise your glass to a player you may not have rooted for, but who deserves every ounce of respect you have.

Chilly, this one's for you.