Through three games so far in this year's NBA Summer League in Las Vegas both the Phoenix Suns and the NBA D-League Select team hold a 1-2 record. But what does that matter. It doesn't. It really doesn't.

What does matter is that we've all been witness to an exciting first showing at the Las Vegas Summer league by second year player Markieff Morris. Remember, with all the lockout mumbo jumbo last year Morris and other rookies of last season weren't able to have the experience of playing in the summer league.

From the three games of five that the Suns will play, it's very safe to say that Markieff has been very hard at work this off-season conditioning his body and strength as well as improving his all around game. He's averaging a double-double scoring nearly 20 points per game and grabbing 10.7 rebounds. Oh, and by the way he's averaging 3.3 blocks to go along with it. As with all players this summer though, Keef also has shown there are a few things he still needs to work on. Like limiting his fouls and learning to keep his hands off when defending, his FG% could be better but now we're just straining at gnats after just 3 games.

Kendall Marshall on the other hand, has been just as expected. Again - considering it's been just 3 games, Marshall is experiencing most everything a normal rookie point guard experiences when transitioning from the college game to the pro level. Our own Omaha Sun covered thisa bit earlier this week.

For stats on the Suns as well as the NBA D-League select team continue reading.

Here are the stat lines for the Phoenix Suns 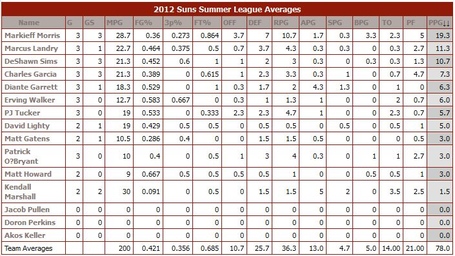 And for the opposition

Since this is a Summer League game - I'm not going to bore you with an analysis of how the game might play-out or what strategies should be imposed because bla bla bla IT DOESN'T MATTER. We just want to see our roster players do well in this competitive environment and if we're lucky we'll be surprised by unheralded talent that might get an invite to an NBA training camp.

If you'd like to watch the game tonight you're going to have to fork over $5 to purchase the NBA Summer League Broadband pass because the game will not be shown on NBA TV tonight.

You can purchase the pass here.

Enjoy the game - and check back later tonight for a brief recap and possibly quotes and/or video from Suns peeps in Las Vegas!