Phoenix Suns Host Fans For Basketball Operations Event: An Inside Look From A BSotS Staff Member

Share All sharing options for: Phoenix Suns Host Fans For Basketball Operations Event: An Inside Look From A BSotS Staff Member

The phone call I received from a member of the Phoenix Suns staff was quite unexpected. First impression - sales call. After some preliminary information about the event, I explicitly stated that I wasn't in a position to entertain purchasing a season ticket package (I was partly right on that first impression), but that I did write for Bright Side of the Sun under the umbrella of SB Nation and I might be interested in coming down to the arena to survey the event and possibly write a story about it. This is that story.

When I was told the Suns were reaching out to fans that had attended games in the past (they are keeping tabs on us apparently), I was intrigued again. I hadn't attended a game last season. I had imposed an ascetic ban on all things NBA based on the selfish and puerile behavior both the owners and players displayed during the lockout. I had vowed not to spend a dollar on tickets, merchandise, etc. for the lockout shortened season. In a contradiction that hasn't evaded my notice, I'm kind of helping grow their brand by my participation in the BSotS forum, but I guess I have to pick my battles. I hoped my abstemious act would play a small role in a less than desirable bottom line for the league that might discourage such contemptible behavior in the future.

My boycott is up so I will be in attendance at some games this season. With the assurance that there would be no pressure to buy, and that I was welcome as a dilettante writer, I decided to attend the event. Here is a portion of the follow up email invitation I received:

Nice to speak with you today! I'm extremely excited that you will be able to join us for this VIP event. As I mentioned, you will get to hear Lon Babby our President of Basketball Operations talk about our free agency moves and outlook for the future as we continue our tradition as the 4th winningest team in the NBA. I've provided the details below. If you have any further questions, please let me know.

- Who: Jim Coughenour and Guest

Please park in the attached US Airways Center garage off of 1st street between Jefferson and Jackson. Parking is complimentary. After you park, walk into the Casino Arizona Pavilion and check in at our registration table. Then walk down through the FlexPrint Club where we will have heavy appetizers, dessert, beer, and wine.

Upon arriving I received a folder with 6th Man and season ticket information (promotional material), a lanyard that identified me and was instructed to fill out an entry for a free raffle (this will have significance later). The attendees were then funneled downstairs from the main pavilion where appetizers and drinks were served. Despite fancying myself a bit of a gastronome, I did not partake of the panoply of savory foods that were made available. I didn't drink any of Sarver's free beer, either. I was there on a mission of discovery, and a full belly can lead to a slow wit. Plus, after all the buildup, I wanted my first official free meal from the Suns to be a sandwich; and alas there were none. There were, what appeared to be, Southwestern egg rolls and meatballs among the selection. Babby himself commented that the meatballs were delicious (and spicy). In retrospect, maybe I should have had one.

Now that the appetizers are out of the way, jump it for the main course.

The presentation began with a speech by Lon Babby. He summarized some of the activities of the team during the free agency period and spoke about the mission statement moving forward. He reiterated that the goal of the franchise was to compete for championships. He mentioned that he wouldn't have taken the job if he didn't feel he would be given the opportunity and afforded the necessary resources to do so. He did seem somewhat more gesticulative and animated at points during the speech than I've seen him in his public appearances I've watched. He drew unprompted (good natured) boos on one occasion (when referring to Mitch Kupchak and the Lakers calling about Nash) as well as genuine laughter (when referring to his initial reaction to the Lakers inquiry).

The first question posed to Babby was regarding who the backup center would be for the Suns this season with Lopez being traded to the Hornets. Babby responded that the trade was actually in jeopardy due to complications with the rules. He put the odds at 50/50, which was a stark contrast from the reports that had been swirling around from various media outlets professing that the consummation of the deal was basically a formality. Babby's prediction did seem somewhat prophetic/accurate in hindsight as the trade ended up taking two additional days to complete, apparently due to CBA rule obstacles.

After emailing news of the differing characterization of the pending trade to BSotS staff members, they relayed it on twitter:

Babby told meeting of Suns fans that Lopez trade is 50/50 due to rules complications.

It was later confirmed by Paul Coro of the Arizona Republic:

Confirmed @BrightSideSun tweet that Babby told fans that Lopez trade chance is 50-50. An agreement remains. Obliging the rules is the issue.

Breaking news courtesy of Bright Side of the Sun. Alex Laugan followed up on this the next morning with his compelling and informative piece outlining the possible obstacles in the 3 team trade and BSotS was the head of the snake in delivering the most up to date information on this topic.

Two other questions from the audience centered around acquiring a new superstar for the Suns after the evanescence of elite talent from the last era. Babby elicited laughter from the audience again when one of the questions asked about the possibility of trading for a 6'10" player from Florida who was a good rebounder, to which Babby retorted that Ryan Andersen had already been traded to the Hornets. A third inquired about how Babby sees the dynamic working between Dragic and Marshall moving forward (not this year, but two or three years down the road).

Then, I was given the opportunity to ask Lon Babby a question. Since I had just finished writing a post that raised many questions about the details surrounding Grant Hill's departure, it seemed only natural to propose a query pertaining to that. I asked a brilliantly crafted (and delivered) question encompassing many of the issues I raised in my story from Wednesday morning (Babby seemed very impressed) and I got more from his answer than I expected. For anyone not familiar with the story (and those who didn't click on the link right above this and read it - do it), my question to Babby was framed along these lines:

The Luis Scola amnesty waiver claim appears to be a win now move. Wouldn't Grant Hill have been able to provide many of the same attributes as Scola at a bargain price? You had stated previously that you would be extremely disappointed if Hill played somewhere else. Given the nature of your long standing relationship with Hill, how would you characterize the nature of his departure from the Phoenix Suns and do you think there is a chance he might return to Phoenix in some capacity at a point in the future?

Babby seemed rather restrained in his answer. I thought I sensed that he was somewhat conflicted over the situation (just my impression). He said that he was extremely disappointed (just as he stated he would be). He said that he would never consider saying anything derogatory about Hill or the circumstances surrounding the situation. He said that the Scola waiver claim was made after Hill and he had discussed his future, or lack thereof, with the team. Scola was (partly) acquired in an attempt to fill the vacuous void in team leadership that was created by the egress of the former team leaders. He said that it would be a great boon to the franchise if Hill chose to be affiliated with the Suns after his playing career, but that Hill was such a profoundly talented individual that it might be limiting for him to accept a role with the Suns when he was capable of such prodigious accomplishments.

After the Q & A session ended they took everybody out on the court and people were served cookies and coffee and given the opportunity to have a shoot around on the baskets. People that were interested were taken up to seats in the lower bowl and discussed ticket plan options. I spent most of this time talking with a sales manager, who was a recent transplant that had previously worked in the Kansas City Royals organization. He took me back to the Suns practice court and gave me a brief tour of the arena.

I also spoke with the person who invited me to the event. It appears she was also a tyro in the organization and informed me that the Suns have been adding staff in preparation to return to normal operating levels after the truncated season. It was a very low pressure atmosphere and the staff was very cordial and accommodating. It was nothing like the car dealership climate I had been chary of stumbling into. I thought that the event was a good way of reaching out to fans and giving them an inside look at things they normally aren't privy to. She said the organization planned on hosting more events like this in the future, so maybe next time your phone will ring.

One last thing. Right before they introduced Babby they held a raffle (I foreshadowed this earlier). I won an autographed Dudley jersey (he was on the screens in the flexprint room so I guess he's the de facto face of the franchise). An interestingly coincidental night where a BSotS staff member is randomly invited to a Suns event and breaks news on a trade while taking home a signed jersey (pictured below) he wins in a raffle. Not how I had envisioned my Wednesday night unfurling before I got that phone call on Monday. 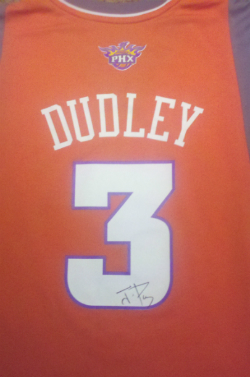