Share All sharing options for: Phoenix Suns Must Shed More Salary In Order To Fit Eric Gordon Under Cap

By trading Gustavo Ayon for Ryan Anderson yesterday, instead of simply signing Anderson as a free agent, the New Orleans Hornets preserved just enough cap space to squeeze Eric Gordon's "max" starting salary under their cap by the hairs on their chinny chin chin.

However, that leaves the Hornets completely capped out on 9 players, leaving them room to sign only veteran minimum free agents and the $2.5 million "room" exception to get to the 13-man squad required by the NBA. Their 4/5 rotation would be Anderson, rookie Anthony Davis and Jason Smith. Their small forward would be a tossup between Aminu and Xavier Henry. That's not a deep team, to be sure.

The Phoenix Suns are in much better shape in terms of team depth and experience, but at this point do not have the cap space to sign all three of their commitments (Gordon, Goran Dragic and Michael Beasley) without shedding another $2.15 million in guaranteed salaries for the Suns to officially take on Gordon's salary.

Not only would the Suns have to shed the $2.15 million, but they also would lose the rights to all of their free agents, including Robin Lopez. The Suns, just like the Hornets, would get back he $2.5 million "room" exception and the ability to sign veterans to minimum-salary deals. And they only have to fill two spots.

(also, hit the jump for a pretty salary cap picture) 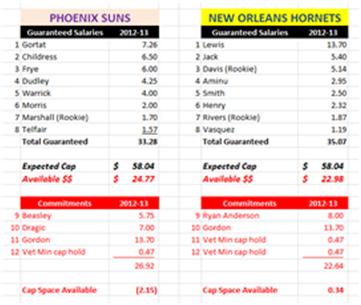 Now we see why New Orleans turned the Ryan Anderson deal into a sign-and-trade, despite Orlando's public decision not to match any offer for Anderson on the open market. Why would NOLA give away an asset (and a good one, I might add, in Gustavo Ayon) to Orlando when they don't have to?

Answer: to shed some salary to Orlando, leaving them enough space under the cap to fit Gordon's offer.

Now the Phoenix Suns have to do something similar, in the event the Hornets decide not to make their team so top-heavy.

First of all, they have to have enough cap space to even MAKE the offer to Gordon on Wednesday (or Tuesday night at 9pm, which is July 11 on the east coast). To do that, the Suns can do one of the following, in addition to renouncing all cap holds:

(1) Ask Goran Dragic or Michael Beasley to wait until July 14 to sign their new contract, or

(3) shed that salary to another team without taking anything back but a draft pick (and hopefully not including their own pick to consummate the deal), or

(4) Exercise their amnesty on Hakim Warrick or Josh Childress

I know everyone's favorite choice is #4, but my guess is that the Suns are wanting to do the first or second option at least at first. Trading away assets for nothing is not good business, and taking that amnesty out of your back pocket so soon would be a shame.

But what if New Orleans won't sign-and-trade Gordon to us, AND they simply decline to match the Suns offer?

At that point, you have to do 3 or 4. Either dump salary on someone else, or use the amnesty on Warrick or Childress. And that's a real bummer. I would much rather the Suns keep bullets in their gun for some other player next summer, in addition to this year's haul.