As reported by Paul Coro this afternoon, the Suns completed their search for a backup big man to man the middle when Marcin Gortat is resting.

The Suns have filled their final guaranteed roster spot and their need for a big man with the most decorated center remaining on the market.

Six-time All-Star Jermaine O'Neal, plagued by injuries in recent years, has agreed to terms to join the Suns.

O'Neal, 33, is a 16-year NBA pro who was an All-Star center for Indiana for six successive seasons from 2001-07. He played the past two seasons for Boston but appeared in only 49 games in those two years. He started 24 games last season for the Celtics, averaging 5.0 points and 5.4 rebounds in 22.8 minutes per game, but underwent season-ending surgery on his left wrist in March.

Straying from their youth movement to get insurance on Channing Frye's shoulder injury, the Suns agreed to terms on what is likely a minimum contract for the 2012-13 season.

At least O'neal is a former all-star.

And Jared Dudley worked out with him this summer and said he was in great shape. 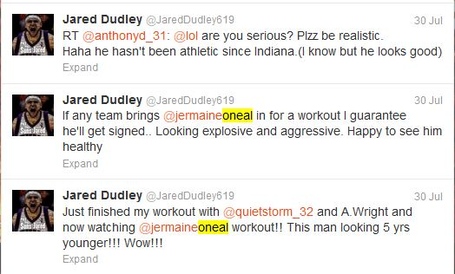 So at least jared Dudley should be excited!