Rotational Depth: What is the Right Mix of Ingredients for the Suns?

Share All sharing options for: Rotational Depth: What is the Right Mix of Ingredients for the Suns?

Alvin Gentry is a chef.

Every season he attempts to create a tantalizing masterpiece out of the mismatched and low grade ingredients stocked in the pantry by the front office. Given brown sugar, milk dudz, french fryes, sea bass, some unusual green spice that doesn't quite smell like oregano and other assorted odds and ends, Gentry is left to build his bricolage. What usually happens? The recipe doesn't quite materialize into a sumptuous finished product and the denizens of Planet Orange expecting a panoply of delectable delicacies end up getting take out instead.

Gentry can't change the ingredients. He is at the mercy of the front office's shopping list. He can tweak other things, though. It could be that the oven isn't quite set to the right temperature. Maybe he can experiment with the quantities of ingredients to find the right mix. Even Polish kielbasa and Nanos cheese must be added in appropriate amounts. Perhaps some ingredients are better left on the shelf altogether...

Chef Gentry needs to find the right number and type of ingredients if the upcoming season is going to be palatable. Obviously the type of ingredients matter, but does the number? Can having a superfluous item involved ruin the whole recipe? Does the rotation size matter? Is there a paramount number that can be calculated to maximize production?

Two - it's not the size of the rotation, it's how you use it. 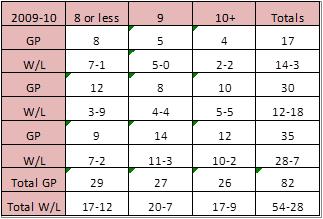 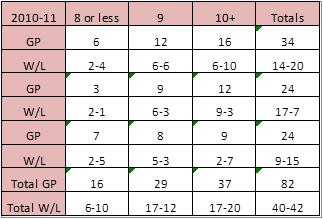 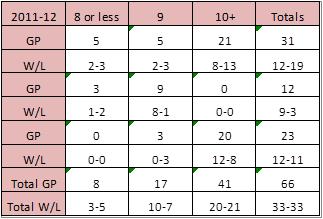 I know what you're thinking. What do these masterfully crafted and aesthetically pleasing tables depict?

They are a breakdown by year of the number of players that played at least 10 minutes in a game over the last three seasons. That was the criteria I chose to determine the rotation size for each game. I also broke each season into three separate portions which represent the ebbs and flows of each campaign.

It has always seemed to me that extended rotations and five man units have been a leitmotif of Gentry's tenure, but the data I compiled doesn't necessarily lend credibility to the veracity of that assumption.

Going back to the 2009-10 season, it can be seen that Gentry used a short bench (8 or less players) more often than he used an extended one. Gentry actually played less than 10 players in 56 games and 10 or more only 26 times. Not exactly what I would have guessed from my recollection of the "bench mob" theme from that season. Not only that, but the ratio basically held true going down the stretch even though it seems like I remember the bench substituting in as a unit fairly frequently. Interesting.

The 2010-11 season saw a shift towards a larger rotation. Games with 10 or more players playing at least 10 minutes grew from 32% to 45%. The stretch run in 2010 was the only time that the ratio was in favor of the smaller rotations, and they actually compared favorably to a deeper bench.

Which takes us to last year. In 2011-12 the percentage of games where 10 or more players played at least 10 minutes was up to 62%. That's nearly double the proportion from just two years prior. What happened here? Is this just a function of trying to keep players fresh based on the frenzied pace of the lockout shortened season? The bench from 2009-10 was the most celebrated, and seemed to predominate over their successive versions, but they actually got less burn than the reserves from the following seasons. Was this due to a lack of star power at the front of the rotation, the age of key components or did Gentry just fall in love with the bench?

We notice a trend in terms of rotation size, but what else can we glean? What about the records based on rotation size? Over the last three seasons the Suns are 26-27 when eight or less players play at least 10 minutes. They are 47-26 with a nine man rotation. Their record is 54-50 with 10 or more players above the mark. Not only is the nine man rotation easily the best overall record, but it is the best record each individual season and the only winning record both of the last two.

Is it really that easy? Is the magic number of ingredients nine?

Other factors play into the overall picture, this analysis is far from comprehensive. In 2009-10, the Suns were struggling through a midseason swoon before the addition of Robin Lopez to the starting lineup and a renascent Amar'e Stoudemire propelled them to a strong finish. The Suns were 12-13 in the 2010-11 season when the Hedo/Gortat trade went down. They labored to the tune of 2-7 over the next nine games before the components began to coalesce and the team went on a run. The 2011-12 campaign arrived with a brand new set of challenges due to the lockout shortened season. The team's best stretch of play came right after the all-star break. Was this a function of being rested? Both of the last two seasons key injuries seemed to derail a late rally that fell just short due to poor early season posturing. It is important to look at the context of all these situations. Is Gentry playing a tighter rotation in close or critical games? Is he clearing the bench in lopsided contests (wins and losses)? These are all pertinent factors in the evaluation. 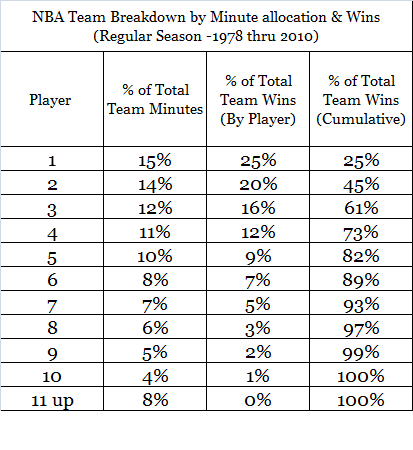 Wages of Wins would seem to agree with my analysis. The 10th man is only providing 1% of the team wins. Last year that would have been .33 wins for the Suns. Not only that, but they only produce wins at an inefficient rate of 25% per percentage of minutes played. Past 10, it's even worse. No wins at all. Doesn't it make sense to conclude that a team could thereby win more games by giving the 12% of minutes that is producing half a win for a 50 win team to players at the top of the rotation? By only giving nine players minutes a team would win more games by this logic. 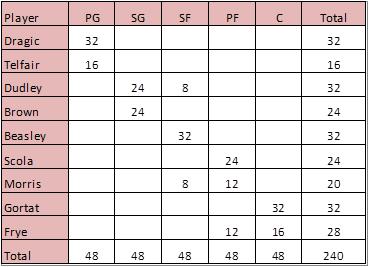 So there we have it. Nine is a magic number, yes it is, it's a magic number. Here's how I would distribute the minutes to maximize efficiency based off of my extrapolations. Obviously it can't work out this seamlessly. Injuries and a variety of other impediments prevent a team from picking and sticking to a nine man rotation. Still, this is what I envision as an ideal scenario based on the current construction of the roster.

What do you think is the optimal rotation size? Is there actually a set number or is it completely dependent on the specifics of each situation? Who do you think should be in the rotation for the Suns this upcoming season and who's deserving of what minutes? Please feel free to point out any specious reasoning I employed or confute my findings and conclusions.

I'm looking forward to seeing how things actually play out. It should be interesting. Hopefull we're in store for something delicious. If not, we can always order a pizza.