NBAWordAssociation: What Does America Think Of The Phoenix Suns?

Share All sharing options for: NBAWordAssociation: What Does America Think Of The Phoenix Suns?

Writers throughout SB Nation played a little Word Association with their brethren NBA teams this past week. We each got a list of all NBA teams and fired off the first word that came to mind about that franchise. And the results were quite interesting. When you look at all the words applied to each team, you get a sense of how the rest of the country feels about your team.

Not surprisingly most comments were negative or snarky. It's not that SB Nation writers are pessimists by nature, but rather that one's first reaction to any other NBA team besides their own is simply going to be tainted with distaste. Would your first word about the Mavs, Lakers, Clippers or Spurs be a compliment?

Read on to see what others think about the Phoenix Suns.

Another outcome of the Word Association game is that some "trigger words" just don't engender a reaction at all. If you personally have no opinion on something, you're likely to draw a blank when asked to even give a one-word response to that trigger.

When I took the test, I drew a complete blank on half a dozen NBA teams. What's the first word that comes to mind on the Milwaukee Bucks? Nothing. The Washington Wizards? Zilch. The Charlotte Bobcats? Nada.

On the other hand, it was easy to come up with a quick one-word reaction to Los Angeles Lakers (spoiled), Portland Trailblazers (injured) and Mavericks (goingdown).

But enough about me.

What did other writers have to say about the Phoenix Suns?

As you can see, a majority of the comments related to bygone Suns - Steve Nash and the Colangelos.

But even worse, many of them were benign. Emotionless.

Apparently, most of the NBA world thinks of the Suns like that lovable little kid down the street. The kid you smile kindly at, and want to rustle his hair or pinch his cheek. When the kid gets bullied, your first reaction is to shrug - like it was meant to happen - and then maybe you want to step in to stop it before it gets out of hand and someone really gets hurt.

At least, that's my reaction after reading these comments.

What did people think of the Suns' foes in the Pacific? 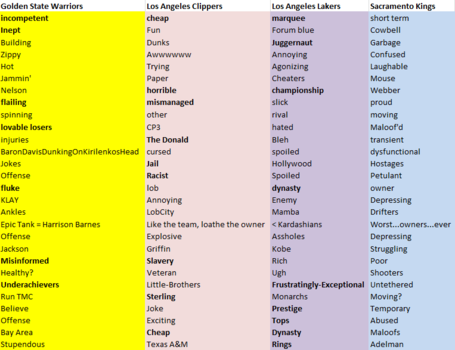 This is where you start seeing the dismissive, and sometimes vitriolic, reactions. The Suns may not be the most talented, but they do appear to be the most-liked team in the Pacific. So there's that!

Now let's check out some comments on a couple of other Suns rivals. 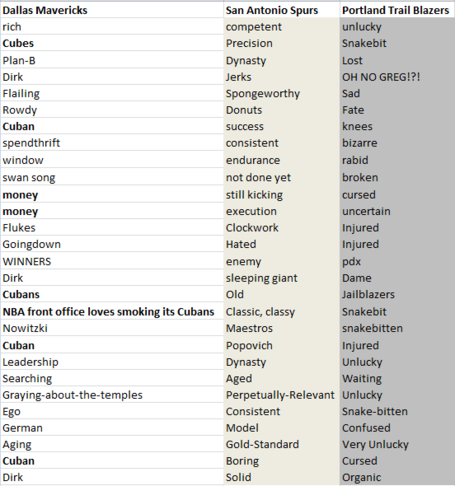 Folks associates injury with Portland, consistency with the Spurs and Cuban with Dallas.

If you want to know what people said about other teams, check out the other SBNation blogs on NBAWordAssociation keyword.

What do you all think?

Do these comments really reflect the Suns franchise?

Are people saying the right things about our foes?