Channing Frye Out For Year: Next Starts Now

Share All sharing options for: Channing Frye Out For Year: Next Starts Now

The Phoenix Suns held a press conference on Friday after the reports regarding Channing Frye's enlarged heart (dilated cardiomyopathy) were made public. Now that the initial shock has worn off, the prognosis from the Suns seems to be more sanguine that saturnine.

"There is a very real chance that he could return to normal function and a normal lifestyle and that's what we all need to be hopeful for," said team cardiologist Tim Byrne. When asked if he thought the chance was better than not he responded, "Yes. The chance is better than not."

Frye will be reevaluated in December and the expectation is that he very well may miss the entire season. That is a crushing blow to a Suns team in need of stability and leadership while they navigate the obstacles of a transition from one era to the next. We all wish Channing the best and a speedy recovery, but what impact will Frye's absence have on the Suns this coming season?

Punch it for some particulars from the presser and a prognosis for Planet Orange.

Babby was his usual eloquent self at the press conference. He was bursting with pithy aphorisms (I think I've heard him refer to them as apothegms on a previous occasion - a man after my own heart).

"Sometimes in life when you travel down a road and you look far down that road it looks like it's the end of the road, but if you keep travelling and you keep going down that path when you get to what appeared to be the end of the road it turns out it was only a bend in the road and if you make the right turns the road has a long, long way to go," said Babby. "Channing knows he has our full support as he travels down this path."

I have no doubt that the Suns will exhaust every possible resource to ensure that Frye has a full recovery. This organization has a long tradition of being peerless in terms of their medical staff and player care. In spite of Sarver's shortcomings and malfeasance with respect to basketball, I have complete faith that he will go to any length in this situation.

Frye presented as optimistic overall, and appears to have a very grounded perspective about the situation. He will still be rehabbing his shoulder in the coming days, but will be limited to non-aerobic activities such as walking, yoga, pilates and golf (there's a silver lining!).

"Any time an athlete hears something about your heart. Like I said yesterday, it's not a knee, it's not a shoulder, you know, it's not your foot. It's not something that they can say well, this is gonna get better if you do A, B, C and D." said Frye. "This is something that's internal and we just have to wait and see."

When asked if he had decided not to play this year Frye responded, "Well, it's not like I not decided. I think it's just, I would almost say irresponsible of me to push something like this unless I had full clearance from not only Dr. Byrne, but I think he would almost recommend me seeing another doctor and making sure that everything is, you know, I'm never going to be 100%, I've had eight years in the league, but at least 99. This is not something to play with because this affects me every day that I'm running out there and pushing myself. So until I get full clearance from not only the Suns and Dr. Byrne, and maybe another doctor, I'm going to hope to come back as soon as I can, but at the same time I have to allow my body to do what it has to do so, you know, when my son's 15 or 16 I don't just have to sit on the sidelines. I can actually go out and hoop with him and run with my daughter and go out there and play."

Team cardiologist Tim Byrne joined the press conference by telephone and also fielded questions. "The fact that Channing presented with such a high functional status and the fact that this was found with the screening so early would really portend an excellent prognosis," said Dr. Byrne.

He said that the most likely cause was a virus, "But after all the testing has been completed we still don't really know." He finished by saying that, "When he's cleared, he'll be cleared to participate at the highest level. But that's when and if."

Hopefully it's when, not if.

Frye also expressed his gratitude for the support he has received from everyone. He said that even fans of the Lakers and Spurs had sent their wishes. Thank you (really) for the gesture, but don't think this means we don't still hate you.

There was one thing that bugged me about the press conference.

Early at the press conference when Frye was asked how long he had known about the condition, he told the reporters it had been a week or two. Wouldn't he know exactly how long it had been? Near the end of the interview Channing told them that he was rested because he hadn't done anything in three weeks. Why was he being prevaricative, or is it possible that the recent events have just blended together due to the stress and the strain? I don't know, but it just seemed odd.

Now for some basketball discussion, what with the start of training camp only eight days away. Babby said that he doesn't expect the team to do anything dramatic at this point. They had already prepared for the possibility that Frye would miss time due to his shoulder injury. I personally think that Uncle Lon is trying to put on a brave face in front of the children, because I'm positive that he realizes this is a game changer for the upcoming season.

Frye brought a lot of versatility to this team. He is really the only player on the roster who has proven that he can effectively play both the four and the five for extended minutes. This provided invaluable depth to the roster. Frye also added an extra dimension to the game with his ability to spread the floor as a stretch big. Frye actually led the team in made three point field goals each of his three seasons in Phoenix. It appears that the Suns may be preparing to play a more traditional lineup this season with two bigs on the block.

Babby seemed to think that was the direction the team was headed as he mentioned that this would be a chance for Scola and Morris to earn more minutes before he offered that Beasley could also play spot minutes at the four. The more we see of Scola and O'Neal, the less we will see of three point attempts from the front court.

This chart shows the per36 values for the Suns front court players (minus Gortat) from last season. The boxes shaded in green are areas where Frye ranked either first or second among this grouping last season. I know we can argue this point interminably, but I will go on the record saying that based on last season I would have taken Frye over anyone in this group. Now that the Suns have lost Frye during one of his prime years, they have two aging veterans and two unproven tyros.

The Suns will not get cap relief due to Frye's condition. They would have to be over the cap in order to be granted an exception to sign a replacement. The Suns are not over the cap. The chart listed below shows exactly where the team stands. What Frye's condition does mean is that he will not be traded as some people hoped recently speculated. Scola isn't going anywhere (until next year at least) and Morris isn't going anywhere. These are the Suns power forwards. 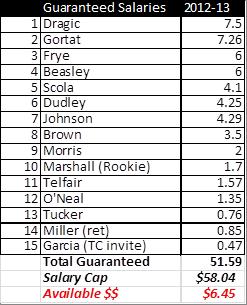 Frye was, if nothing else, a safety net for the Suns. Now they are walking a tightrope without one. Scola not working out? Sophomore growing pains for Morris? Frye was at least a fairly proven commodity. Once again, probably more proven than the litter of question marks that now populate the Suns front court. As the chart shows, the Suns do still have flexibility. The Scola waiver claim could end up being a coup if he plays well enough to mollify the sting of Frye's vacancy. Then again, if he falters, the Suns could be in big trouble.

How big of a detriment will Frye's absence be? Does this injury further diminish the glimmer of hope for a playoff run this season, or are you of the mindset that Frye was a bit piece at best this season anyway? Should the Suns pursue options to add to the roster, or are they better off to bide their time, save their money and wait to see what materializes as the season progresses (you know Babby loves to keep his powder dry)?

Channing Frye Cleared to Return from year away from basketball