What role will Michael Beasley play on the Suns' offense this year? To get a better idea of his strengths and weaknesses, I took a look at the film from last season. Read on to see what I found out.

Michael Beasley dominated in his one and only year in college. At Kanas State, Beasley scored on anyone and everyone that tried to check him. That offensive ability is what led to the Miami Heat taking him with the second overall pick in the 2008 NBA Draft.

However, after his first four years in the NBA, he still hasn’t figured things out. Beasley spent his first two years in Miami playing power forward and the last two seasons in Minnesota as a small forward, but things didn’t really click for him in either place or at either position.

In reviewing some of his plays, it is pretty clear why he has struggled. A huge part of his poor play is on him and his decision-making. However, I believe the position he was put in, particularly in Minnesota, has played a large part as well.

As I wrote when Beasley was signed, he is not the guy many think he is. He is not a go-to offensive player in the traditional sense of someone you can give the ball to and expect a bucket or a foul. He’s not a great creator of offense from the perimeter. For a small forward, Beasley is not a particularly good ball-handler, nor is he a good passer.

That being said, the talent that made him a high pick is still there. He can still put points on the board and when he heats up, he is tough to slow down. The task the Suns are faced with is putting Beasley in position to play to his strengths without him trying to do too much.

Beasley’s isolation ability separates him from the other wings on the roster, and this is an area that he certainly can help Phoenix’s offense. However, to feature him in this role would be a mistake.

Here’s an example of a positive isolation play by Beasley (all screen caps taken from footage from MySynergySports.com). 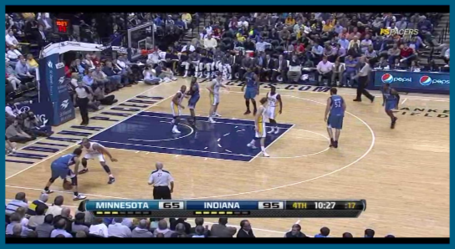 In this play we see Beasley isolated in the corner. He has the entire left side of the court with which to work since the other four Wolves and their defenders were on the other side. 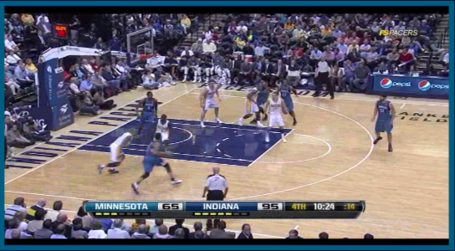 Beasley gives his defender a jab-step then uses his long strides to blow by his defender. As you can see, the only defender in position to help is Indiana’s diminutive point guard Darren Collison. 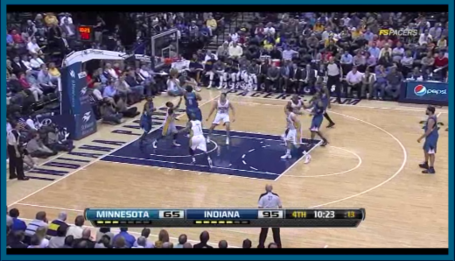 At this point Beasley has already beaten his man. He sweeps in and uses his length to finish over the help defense. Great play by Beasley, two points for Minnesota.

However, when you give the ball to Beasley in isolation, prepare for plenty of derps as well. Here’s a play showing a shot that Beasley takes far too often. 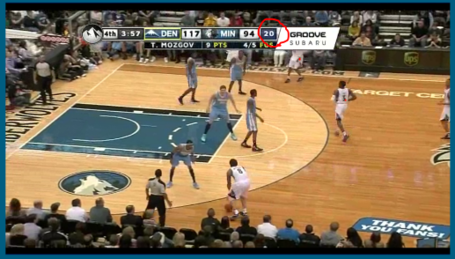 There are a few things that needed to be pointed out here. First, take a look at the shot clock: there are still 20 seconds left, so no need to hurry. Second, by my count all five Nuggets are back on defense, while Beasley only has two of his teammates up the court with him. 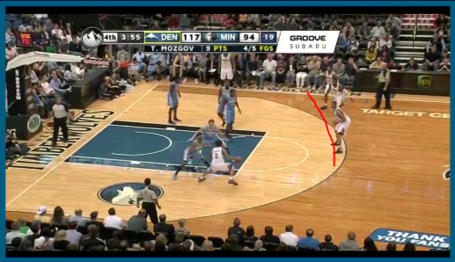 Instead of waiting for his teammates to get down the court to set up the offense, Beasley decides to take it himself. Making things even worse, he decides to drive to his right - where the help defense is – instead of going left – where the court is wide open. His drive gets shut down by two Nuggets, and the other three are also hanging around the paint. That means Beasley has three teammates wide open around the perimeter. So what does he do? 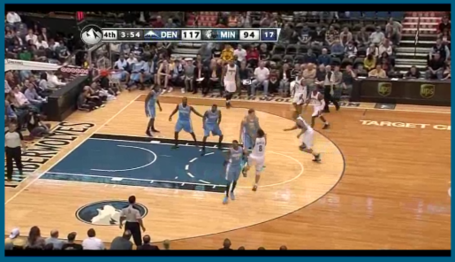 This is a recurring problem with Beasley. First, he does not move the ball nearly as often as he should. Second, he settles for far too many jump shots. Part of that is the lack of quickness and advanced ball-handling; he just can’t beat his man off the dribble all that often. And I don’t know if it’s an ego thing or poor basketball IQ, but it seems to me Beasley thinks those are good shots.

This is the area the Suns will want to get Beasley plenty of touches this year. Beasley can be a mismatch while posting up, either operating out of the high post or taking advantage of his size down on the block.

Here's an example of a play where Beasley gets the ball in the high post. 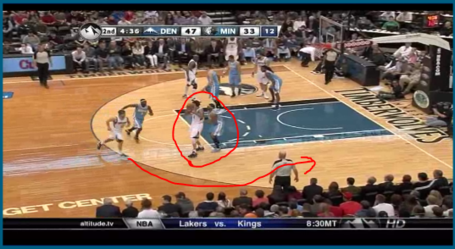 Beasley sets up at the elbow and receives the pass from J.J. Barea, who runs to the corner to give Beasley space to go to work on Corey Brewer. 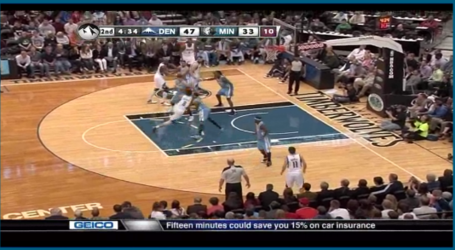 Beasley turns and faces up on Brewer. He has a size and strength advantage here, and with an explosive first step and long strides he gets past him. The other Nuggets defenders have to respect the shooting ability of Anthony Tolliver and Martell Webster on the weak side and are too slow in rotating to help out their teammate. 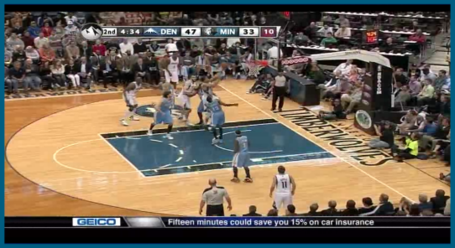 Again, Beasley uses his length and explosiveness to go up and finish over the top of the defense for two points.

As a former power forward, Beasley can also be effective down on the block. Here's a smart play by Beasley down low. 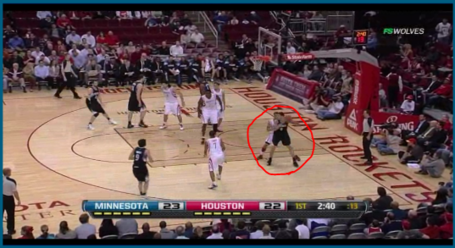 Beasley has a big mismatch here with shooting guard Courtney Lee trying to check him in the post. Houston's Kyle Lowry is in no man's land defensively right now, looking to double but not coming hard or fully committing. 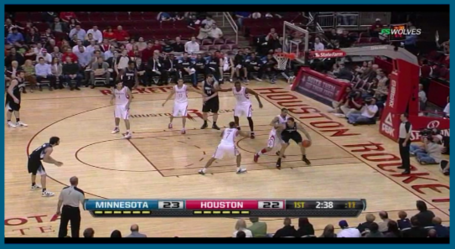 Beasley recognizes the mismatch and backs the smaller Lee down. Lowry left Ricky Rubio and is coming down to double, while Samuel Dalembert is waiting in the lane. But neither are in position to stop a quick move by Beasley. 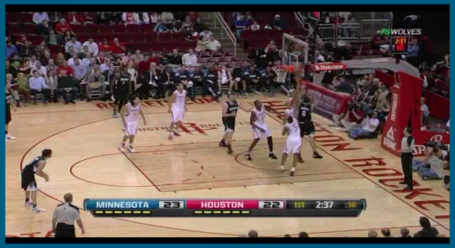 Beasley uses a drop step and spins baseline, away from the defense. He then elevates over the top and finishes at the basket. Lowry is too late to stop him and by going baseline he takes Dalembert out of the play. It's a one-on-one with Lee, and the 6-foot-5 shooting guard is just too small to stop Beasley.

With Beasley's length, athleticism and shooting touch he can be very effective slashing off the ball. The last play I have here is Beasley cutting in for an easy two points. 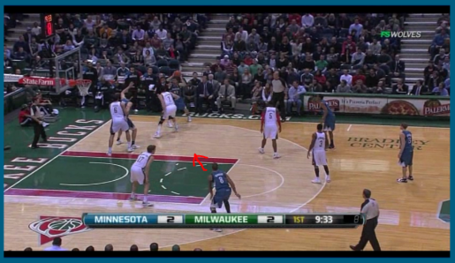 This play starts after an offensive rebound by the Timberwolves. The Minnesota player has the ball in the corner and is surveying the court. Beasley realizes A) that his defender is playing off of him and B) that the middle of the floor is wide open. Beasley cuts hard to the paint and gives his teammate an open target. 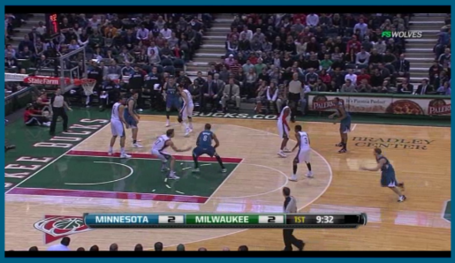 Beasley catches the ball as Dunleavy tries to recover and get back in front of him. However, Beasley is too explosive and keeps his momentum going towards the hoop. 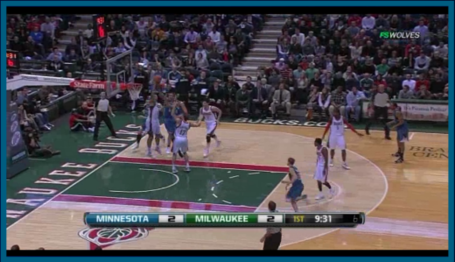 Beasley again elevates and finishes over the top of both Dunleavy and the big man under the basket who tried to help.

Although Beasley is not so adept at creating offense off the dribble, he can be devastating when you get him on the move. His size and athleticism make him tough to stop. He's much more effective when he only has to use one or two dribbles to get to the rim.

Putting it all Together

There is no doubting Michael Beasley's talent. He's capable of heating up and dominating like no one else on this Suns roster.

However, for him to be that guy more often than he has been thus far it is going to take a joint effort by Beasley and the team. Alvin Gentry and Goran Dragic must put Beasley in position to play to his strengths, but Beasley also has to be willing to be used in that way.

If the Suns let Beasley stand out on the wing most of the game and just do whatever he wants, nothing will change. Asking him to create offense off the dribble on a regular basis is a recipe for disaster.

Beasley needs to do his work off the ball. He needs to get his shots in the post and on the move rather than on the wing. He needs to be a finisher more than a creator.

The ball-stopping and bad jump shots need to stop. There is definitely a place for Beasley in this new Suns offense, but Beasley has to be willing to make the necessary adjustments.

What say you Bright Side of the Sun? How will Gentry use Beasley? Will we see a new man, or the same old Beasley? The answers to these questions could be the difference between hope for the future and a disappointing season.