When this week's network-wide theme came up, I drew a blank. The Phoenix Suns have had their issues over the years in terms of disappointing front office moves, disappointing coin flips and disappointing playoff finishes.

But disappointing individual players? Hmmm. That's where I am a bit stuck. The Suns have rarely fielded a player who massively, historically disappointed the masses in his performance. The Colangelos always drafted and signed quality individual people who happened to play the game of basketball. And when they took a chance on a person of questionable character (Chambers, Barkley), those guys cleaned up their acts and outperformed their expectations.

But there were a few who didn't measure up to the Suns expectations at some point.

You could point out Walter Davis, the six-time all-star who developed an addiction and spent time in rehab 27 years ago. But he was such a good player for the mid-80s Suns and was so loved by the fans, I just can't see Sweet D winning this "competition".

Then there was Jason Kidd who came to the Suns with such promise and skill, a PG who could have led the Suns to big things in the Valley. Jason Kidd was the best passer in the league and one of the best defenders. His pairing with Anfernee Hardaway was supposed to be "Backcourt 2000". But then he beat his wife and "poof" he was traded before the dust even settled. We got Starbury, while the Nets got back-to-back NBA Finals appearances.

But do Suns fans look back on Jason Kidd as a disappointment? Not really. Colangelo traded him faster than the fans could officially turn against the kid. And young, exciting Stephon Marbury replaced him. So, all's well that ends well, right?

There was Oliver Miller in the mid-90s, who ate his way out of the league. 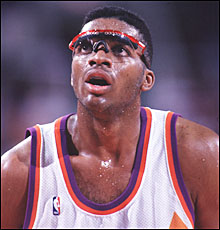 Maybe be qualifies? The guy was a good NBA center, despite being short for his position, was a great passer and had a deft touch around the basket. But then he gained weight rather than lost it, and pretty soon couldn't keep up on the court. You could qualify Oliver as a bust and a disappointment for sure.

He lasted only two seasons in Phoenix before heading to Detroit a year as a free agent, then was unprotected by Detroit and drafted by expansion Toronto for a year before being released. He spent time between Dallas and Toronto for a few years, only to end up back in Phoenix for one more season before being entirely out of the league for a couple years until a brief stint in Minnesota. 11 years, 9 seasons, 7 teams. Never playing more than 76 games in any year and only 2 years where he started more than 22 of them. His best year (Detroit) ended in him being left unprotected. Ouch.

And then there was Richard Dumas. 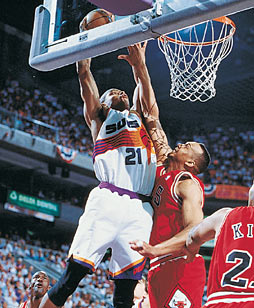 If ever there was a guy who makes me shake my head in wonder, just full of disbelief that he threw his career down the drain so soon and so abjectly, it's Richard Dumas. I loved that kid, loved the way he played so effortlessly and effectively.

He was drafted by the Suns in 1991 with the pick they got for unloading accused drug dealer James Edwards to Detroit in 1988, but was banned for a year from the NBA for substance abuse.

He got clean and literally burst onto the scene with one of the two best teams in the NBA. By far, the very best season of his career was the dream season of 1992-93. Richard was a rookie, but somehow earned a starting spot for 32 games on a 62-win team that went all the way to the Finals. He averaged 15.8 points per game, plus 4.6 rebounds, 1.3 assists and 1.8 steals. Per game. Not "per 36 minutes". That was only in 27.5 minutes per game as a rookie. Unfortunately, he got a stress fracture during the 1992-93 playoffs, and some people to this day blame the Finals loss on missing Dumas' presence.

And then the wheels really fell off. He was banned again the next season (1993-94), then played only 54 games the next two seasons after that - playing very pedestrian - before being released in the summer of 1995. He got only one more chance, with John Lucas in Philly, but only lasted a year there.

Talk about a total flameout. That's my call for biggest Suns disappointment ever.