The Suns have been bad on the road this season. Really bad. In a season of humiliating defeats, the Suns may have actually outdone themselves last night. Let's sift through the wreckage and find out.

I could break down a play-by-play of the third quarter or second half, but a more succinct synopsis that precludes that necessity would be that the Suns got bent over a stump. Terse. True.

Here's what some of the players had to say about the brutal beatdown via Paul Coro's post game report:

Dragic: "We said at halftime, 'Let's not repeat the same mistakes.' Then somebody pushed the stop button and we stopped playing. Our chemistry and movement of the ball went downhill. We didn't find the rhythm. They're a great team with a lot of weapons, but that's no excuse. We took away our confidence. We missed some good shots. We were thinking, 'Uh-oh, it's happening again' if we miss, and our defense was terrible."

And here's a delineation of futility this season per this nifty little chart: 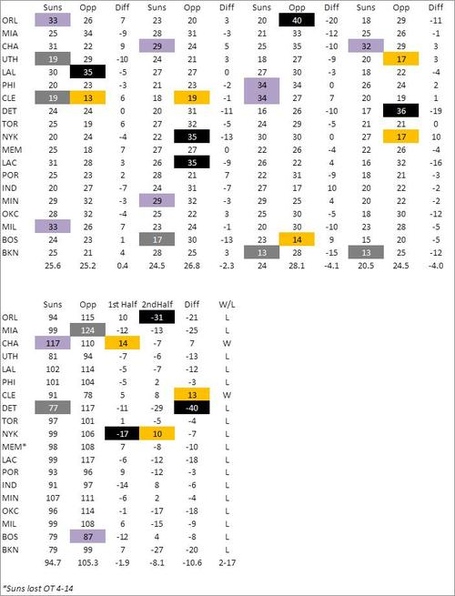 Special thanks to Kris Habbas for doing all the footwork on this table while I take all of the credit.

Last night were the lowest point totals for the Suns in a third quarter (13) and in a fourth quarter (13) this season.

The Suns were outscored 53-26 in the second half. 26 points was the lowest total in a half this season. The franchise record for least points in a half is 25. It was the third worst second half margin this season (-27), the others were at Orlando (-31) and at Detroit (-29).

The Suns had more turnovers (10) than field goals (9) in the second half.

The 20 point loss was still only the fourth worst loss (by point differential) on the road this season.

The Suns have lost 12 games in a row on the road, which is the longest such streak since the 1983-84 season.

So where does last night's savage beating rank in this season of futility and shame?