The Phoenix Suns need a few superstars. They need a franchise player. Those don't grow on trees, but they do come via the draft.

I have written on this topic several times (as far back as here in August 2010 and here in July 2010, when the Suns let their last franchise draft pick leave). At the time, losing a ton of games to win the lottery was a far-fetched and unlikely notion.

Fast forward to spring of 2013. The Phoenix Suns are now looking at the cream of the crop in the draft while suffering through the cost of acquiring a top pick: lots and lots of losing.

This is unfamiliar territory. The Suns are used to winning, and have publicly stated they would rather be competitive year-in-year-out than attend the Draft Lottery proceedings. To wit, the Phoenix Suns have the fourth-highest winning percentage in NBA history and have the 10th-most wins in NBA history. The Suns have qualified for the playoffs in a whopping 29 of those 45 seasons.

But of all the top-10 teams in NBA history, the Suns stand out with their inability to finish the job. They have won their division just 6 times, made 2 NBA Finals and have no championships on their resume. 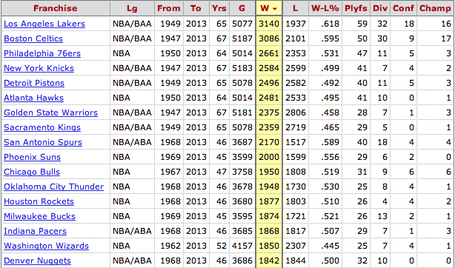 The Phoenix Suns have never had the top overall selection in the NBA draft. They have drafted #2 overall twice in their history, taking Neal Walk (after losing a coin flip for Hall of Famer Lew Alcindor/Kareem Abdul Jabbar) and Armen Gilliam (taken just after Hall of Famer David Robinson).

Shawn Marion was a #9 pick, as was Amare Stoudemire. There was Tim Perry at #7. William Bedford at #6.

Superstars matter, and they come through the draft

Of those only Shaq was acquired via free agency. The rest were drafted and kept.

These 6 guys account for 19 of the last 22 championships in the NBA.

Jordan, Olajuwon, Duncan and Wade were drafted by their team's own draft pick. Kobe was acquired via a draft-day trade with Charlotte. Shaquille O'Neal was signed as a free agent from Orlando.

One-time winning teams include the 2004 Detroit Pistons (no franchise star), the 2007 Boston Celtics (3 stars, but no one franchise player) and the 2011 Dallas Mavericks (franchise player Dirk Nowitzki).

That's it. Three. Three championships won without a multi-ring franchise player at the helm in the last 22 years (since 1991).

Pretty obvious that you need at least that one guy, and that one guy must be acquired via your draft pick.

Lottery picks via trade can help

OKC acquired the #11 overall pick in the 2010 draft because they were willing to absorb a $5 million contract into their available cap space from a team desperate to shed payroll (New Orleans). In the past, they also acquired 2 unprotected first-rounders from the Suns to absorb Thomas' 8 mill. Those *could* have been high picks, but lucky for the Suns they weren't.

Utah Jazz acquired the #9 overall pick in the 2011 draft in a trade from years prior (involving the Suns, no less).

In 2010, Washington traded their #5 overall pick to Minnesota for a couple of warm bodies in their ill-fated attempt to bring in veterans for a playoff push. Minny drafted Ricky Rubio, their future franchise point guard.

Three years ago, the Celtics traded their #5 overall pick to Seattle for Ray Allen and a bad contract or two.

Remember, Kobe was drafted #13 overall via a draft-day trade and the Suns acquired PG Kevin Johnson (#7 overall) from Cleveland for Larry Nance back in 1987. So these high picks *could* turn out to be franchise-changing players.

Utah had that unprotected 2010 pick for years from New York. It could have been a low pick (which the Knicks were banking on), but there was a chance the Jazz could have won the lottery with it too. Though John Wall, the clear #1 in 2010, wouldn't necessarily have fit alongside Deron Williams, that would have allowed them to move on from Williams even faster.

Lottery balls and coin flips have never gone the Suns way. The Suns, for their part, *almost* got Lew Alcindor in 1969. And they *almost* got David Robinson in 1987.

More recently, the Suns *almost* got a #6 draft pick (would have been used to take Joakim Noah) in the summer of 2007. They had Atlanta's top-3-protected pick. Unfortunately, Atlanta kept it by lucking into the #3 pick (taking Al Horford). The Suns had won 62 games that year and *almost* got the guy they needed in Joakim Noah that *could* have propelled them to a ring or two.

This year, it's possible that the Suns acquired 1 or even 2 lottery picks from the Los Angeles Lakers in the Nash trade. Those picks are potentially gold to a team needing lots of young talent.

If the Phoenix Suns want to win a championship some day, they need luck and high draft picks to do it.

The Suns are no longer on that playoff bubble of mediocrity. It's time to strike with young talent via the draft. Sure, there's no sure-fire franchise player in this upcoming draft, but the Suns need the best talent period. And any Top-5 pick is better than anyone on this current roster, and a LOT cheaper than anyone acquired via trade or free agency.