Michael Beasley has been in and out of he Suns' rotation in the last several games, getting a few minutes in one game and then riding the pine in the next.

Beasley was on the thinnest of ice s a result of his horrible play. But when Jared Dudley had to sit out against Chicago, Beasley found himself right back in the rotation and playing significant minutes.

With his Suns -- and possibly his NBA -- career on the line, Beasley delivered. The enigmatic forward hit 10 of his 14 shot attempts for 20 points, and also pulled down six rebounds in about 21 minutes of playing time. But was his strong performance Beasley turning a corner? Or did he simply get hot? After watching each of his possessions a handful of times, I believe it was the latter.

Beasley took 14 shots and turned the ball over five times, for a total of 19 possessions used by Beasley. For those with short attention spans, just read the headlines and look at the pretty pictures. For the rest of you, let's take a look at each one.

Beasley's first touch comes on the left wing. Beasley crosses over and drives middle, but he can't get past his man, Jimmy Butler. Instead of pulling it out or passing to a teammate, Beasley tries to rise and finish over Butler and loses the ball out of bounds in the process for the turnover.

Sebastian Telfair starts the possession with the ball on the left side, while Beasley waits on the weak side. Bassy swings it to Luis Scola at the top of the key, and Beasley circles around to take the dribble-hand off from Scola. Butler goes under Scola instead of staying tight on Beasley, and in essence the hand off turns into a screen. Beasley rises up and knocks down the open shot, but has a toe on the line. 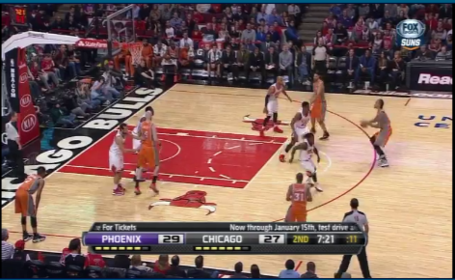 The Suns get the ball inside to Marcin Gortat, and Beasley cuts behind Gortat, losing his man and taking the hand off for the explosive dunk. He finished it with a half pull-up and could have been called for a technical, but it was pretty nonetheless. This is a play we run for Shannon Brown at least once a game, and I really wish we would use it more. 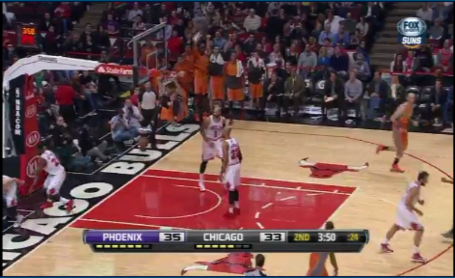 Telfair drives and kicks it out to Beasley. Beasley was the last one down the court and was open at the top of the key. He gets a little excited though and shuffles his feet while trying to drive down the lane an is called for the travel. Turnover number two.

Beasley sets a screen for Bassy, and gets the ball on the roll. He tries to drive baseline, but again can't get past Butler. So Beasley pulls a sweet drop step into the lane then pivot back move and hits a tough turn-around fadeaway jumper from about 10 feet. 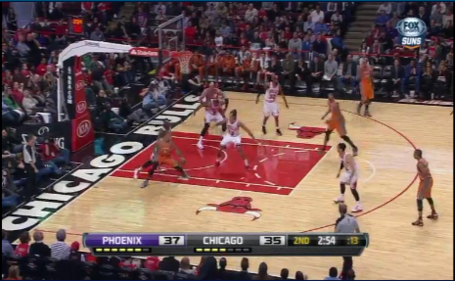 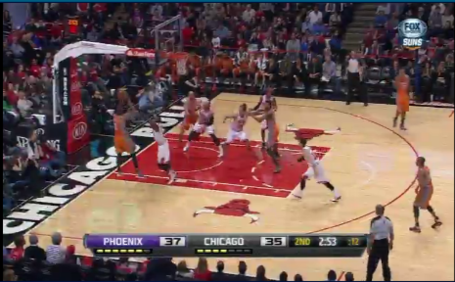 Beasley begins the possession by setting a screen for Brown off the ball. On the screen Beasley's man Luol Deng turns his head for a second, and Beasley pops out to the 3-point line. Beasley gets the ball, and as Deng tries to recover he gets caught on a Gortat screen. Beasley steps in and away from Deng for the rhythm 18-foot jumper and sinks it.

This play was really made by Bassy, but Beasley ran the floor and got rewarded for his effort. Bassy deflects a pass and tracks it down for the steal, and Beasley takes off and beats everyone down the floor. Bassy hits him in stride and he throws it down for his second dunk of the game. 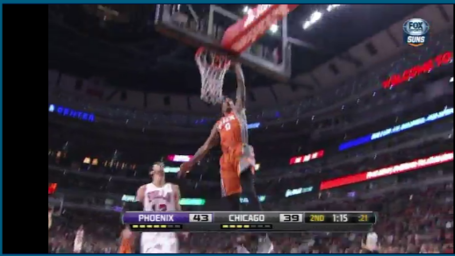 Beasley catches the ball on the wing an runs the pick-and-roll with Gortat. The defense gives him space, and Beasley steps into an open elbow jumper. Two points.

Beasley runs off a screen to get open and take the in-bounds pass at the top of the key. He beats his man (Deng on this play) and avoids Kirk Hinrich who is trying to set up for the charge, but as he tries to go up and finish Beasley gets swatted by Joakim Noah. When Beasley gets to the basket, there is still five seconds left on the clock. He also has three defenders around him, meaning two guys -- in this case Telfair and Gortat -- were wide open. Instead, Beasley challenges a very good shot-blocker in Noah and pays the price. 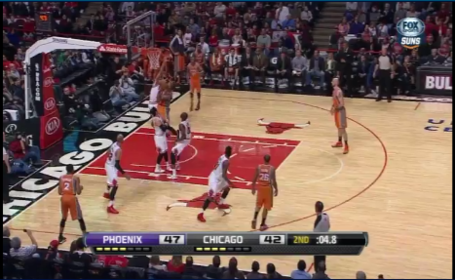 I can't fault Beasley's effort here. There wasn't much time and he took it strong to the basket. It just wasn't the wisest decision in this case. Gortat also could have made it easier on him by following Beasley on his drive and getting closer, instead of hanging back at the elbow. However ...

Beasley is fortunate. Noah keeps the ball in play on the block, and Beasley is able to grab it and make the easy bunny with time to spare.

This shot was probably Beasley's worst decision in this game, and it was vintage Beasley. Beasley brings the ball up the court, and as he goes to call a play Deng goes for the steal. Beasley spins past the gamble by Deng and dribbles forward ... 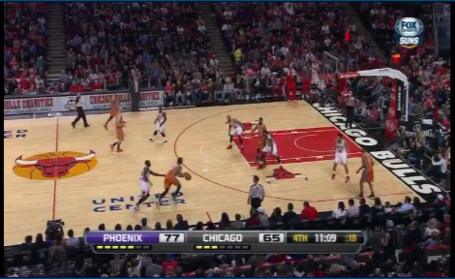 Only to pull-up a step inside the 3-point line instead of pressing the Suns' advantage. The result? Total brick with 17 seconds on the shot clock. 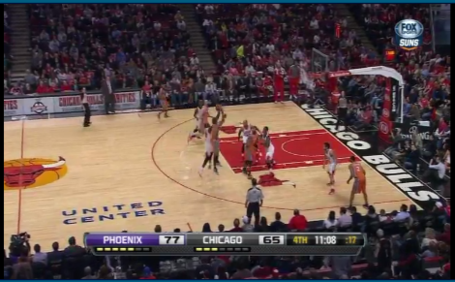 Beasley Isolates on Deng at the top of the key and tries to drive left. Deng stays in front of him, so Beasley rises up and hits a really tough pull-up jumper over the 6-foot-9 Deng. This was a pretty bad shot that just went in. 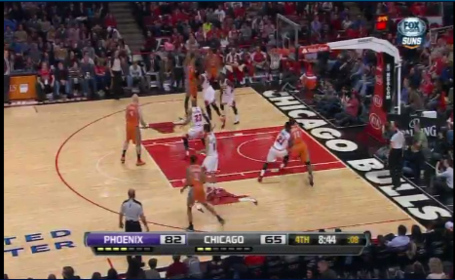 This was a good play that was ruined by a miscommunication. Gortat gets the ball at the elbow, and Beasley runs past him and takes the hand off. Taj Gibson switches over to Beasley, but Beasley is still able to turn the corner and get to the basket. He draws the help defender, leaving Markieff Morris open under the basket. Both players recognize their advantage, but just aren't on the same page. It looks to me like Morris pointed up, calling for a lob pass, and then prepared to jump. 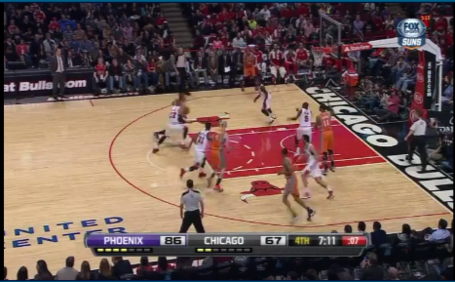 Instead, Beasley throws a bullet pass that bounces off Morris' hands/chest and out of bounds for the turnover. 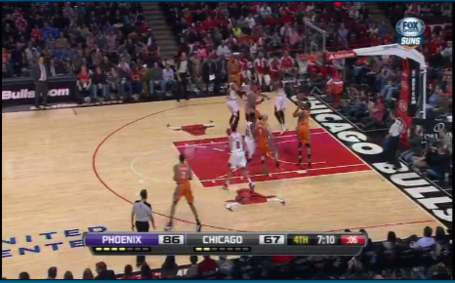 This was simply a horrible, horrible call by the referee. Beasley tries to post up and the ref calls an offensive foul. Nothing happened.

Beasley takes another hand off from Gortat, this time on the other elbow and going to his right. Instead of driving he pulls up for the long two and misses.

This was the play of the game for Beasley. He runs the court and Bassy hits him out on the perimeter. On the catch Beasley gives a very slight head fake, and it's enough to get Hinrich the leave his feet. 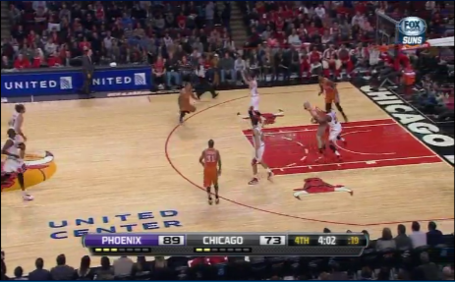 That allows Beasley to blow by him and throw down a ferocious one-handed dunk. 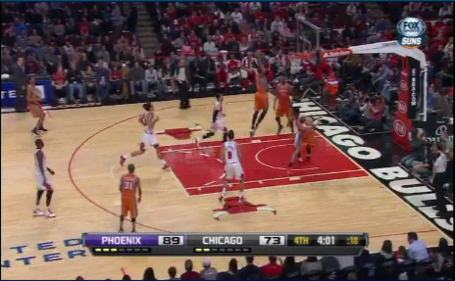 Beasley begins this possession by setting a screen for Bassy, and he receives the ball as he rolls out to the corner. Beasley backs Daequan Cook down a couple dribbles, then kicks the ball back out to Bassy as Hinrich showed for the double. Beasley holds his position and gets the ball back near the elbow. With the shot clock under five seconds, Beasley rises up and hits a fadeaway jumper over the shorter Cook.

Beasley gets the ball on the wing, drives to his right, and loses the ball when he tries to rise up -- for a shot or pass I don't know.

Beasley catches the ball in the corner, surveys the court for a second and decides his best option is to jab step and rise up for a contested 2-pointer from 3-point range. There was only five seconds left on the clock, but it was still a bad shot. At least get behind the line.

There is no doubting that Beasley had a very good game, possibly his best as a Sun. He was the team's second-leading scorer (behind Scola's 22), contributed on the boards, was +8 for the game and scored nearly half the team's points in the second quarter. If he continues to play like this, then we may finally have found the guy the Suns thought they were getting back in July.

However, looking at each of the plays, I don't think Beasley played all that much differently than he has been. The difference was that his shots went in. He still took a lot of mid-to-long range jumpers (nine of his 14 shots were of this variety) and didn't get to the free throw line even one time. Beasley continues to rely on a jumpshot that has proven to be unreliable so far in his Suns career.

Beasley is simply not an isolation scorer. He's just not. He's not fast enough nor does he handle the ball well enough to beat people off the dribble, and he doesn't draw contact. Beasley isolated six times in this game, shooting 1-4 with two turnovers. In every other play type, he was 9-10 with three turnovers (one of which was the bogus offensive foul call). Please, please, please stop isolating Michael Beasley. Doing so is setting him up to fail (a large part of this is on Beasley himself an his decision-making, but the coaching staff deserves some blame as well).

Beasley did very well taking hand-offs in this game, going 2-3 from the field with that miscommunication turnover on an otherwise good play. Get Beasley moving and use a big man to create some space for him. Hand offs, screens and post touches are the only way Beasley is going to be effective. We need to run plays for him, because if we let him play free he's going to take a jumper. That's all there is to it.

Beasley needs to be a finisher, not a creator. In that role, he'll be less reliant on jumpers and the jumpers he does get will usually be better looks with a better chance of going in. Beasley is a guy who can get hot in a hurry and go off at any time. But for that to happen, he needs to see the ball go in the basket a couple times.

What will we see from Beasley tonight? I have no idea. If I was a betting man I'd put my money on Beasley playing like he normally has this season. I just didn't see much reason to believe he has started to get it in this game. But if he can carry over some confidence from this performance, and not only shoot better but start to play to his strengths more, he might be still salvageable.