Top Ten NBA Draft Picks, What Are They Really Good For?

We take a deep dive look at the real value of top ten NBA draft picks by ranking each of the fifty players selected at the top of the last five drafts.

Share All sharing options for: Top Ten NBA Draft Picks, What Are They Really Good For?

Top 10 draft picks, everybody loves them but how good are they?

Let's start by stipulating that ALL NBA PLAYERS come from the draft. Duh. This isn't about draft vs. free agency vs. trades. We'll leave that for some other bar stool.

This is about being realistic about what to expect from those high lottery picks the Phoenix Suns are destined to accumulate over the next few years and as such, to properly gauge their value when it comes to thinking about using them in possible trades.

What we did with this thought experiment was look at all the players picked over the past five years in the top ten slots in the draft. That's fifty players for you math geniuses.

Then we ranked them.

We asked 11 NBA writers* from various markets to rank each player's potential on a scale of one to six:

The picks were then averaged in the chart below. Others have done similar research of draft picks using various statistical measures to rank players (which would have the same issues with young players). I prefer crowd sourcing. Get over it.

There are obviously some issues with the rankings.

Tyreke Evans in his rookie year would have easily been seen as a possible All-Star or even franchise player and he is now considered a "solid starter". Half-way through his rookie year, would Michael Beasley be considered a "deep bench" guy? No. Along those lines, will Andre Drummond will turn into an All-Star? John Wall? I doubt it, but they averaged out that high in their current rankings.

On the flip side, James Harden certainly wouldn't have ranked as a franchise guy until perhaps his second or even third year.

Evaluating young talent is hard even after the guys are in the league. It's even harder before they are drafted. Some teams are better than others but there's a huge element of luck involved. 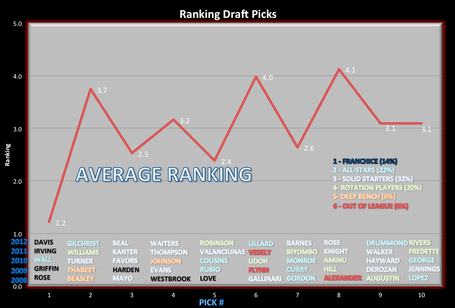 What does it all mean?

Here's what jumped out at me from this little game. I'm sure others will look at this and see different things. Opinions are wonderful!

- 36% of top ten picks project as Franchise or All-Star players. If your goal is to get these studs you are going to need more than one top ten pick since fully 64% (exactly and without fail or variation) will not get you anything you can't find elsewhere.

- None of these guys have won a ring and only Harden, Westbrook and Durant playing together (that's three franchise players on one team) reached the level of being a true contender (so far). Point is, young players take a long time to develop, especially when you have several of them as your core.

- To be even a decent playoff team -- forget contender -- you need several of these top tier players on your roster. The Suns, as Jim C. pointed out in an email, have no one that is or projects to be an All-Star unless you are REALLY high on Dragic....or just really high.

- I look at these names and think about the Pistons. They have two guys on this list (Monroe and Drummond) projecting as stars and a third guy (Knight) who looks like a solid starter. All three taken seven or higher. It's hard to argue they drafted poorly and yet they are still a bad team and look to be years away from being a threat to make it past the first round of the playoffs.

- Because of the vagaries and luck of the draft you need multiple high picks to get one of the studs and Phoenix needs several. That means the Suns will need perhaps four to six top ten picks over the next few years. Then, as we well know, it takes several years for young players to learn how to play and win in the NBA.

- Following a draft strategy, how many years away from the Suns from being a five seed in the West? I would guess six years. Fortunately, I doubt the Suns front office has the patience to wait that long.

Be sure to check out Kris Habbas' 2013 Mock Draft. Are there any franchise players here?