Phoenix Suns' path back to playoffs may already be in place, patience is needed

Should the Suns go for broke right now, and acquire a Rudy Gay or a Josh Smith and forego the summer free agent market? Or should they wait, stay conservative and draft high for a few years? Here's a primer on what the Suns options are.

Share All sharing options for: Phoenix Suns' path back to playoffs may already be in place, patience is needed

The Phoenix Suns are currently 12-24 on the young season. That's pretty bad by itself, but their upcoming schedule is even worse. In the 17 games between now and the All-Star break that begins February 12 (check the schedule here), the Suns will not be favored to win any of them.

That means it's time to start focusing heavily on the trade deadline, and then the draft, and then free agency and more trading this summer.

Just yesterday, a new rumor involving Rudy Gay popped up and got fans all in a tizzy. Expect more rumors to surface in the coming days and weeks. The Suns have:

The Suns play seven home games between now and the break. Only Dallas (Feb 1) and the Lakers (Jan 30) are against teams currently below .500. But Dallas just got Dirk Nowitzki back and Los Angeles is bound to figure out how to win more games than they lose. All the other opponents are in playoff position at this point.

It gets worse. There are 12 road games before the break. Sure there are some beatable teams on the trip - New Orleans, Sacramento, Dallas, maybe even Boston, New Jersey the way they are playing - but the Suns are absolutely abysmal on the road this year. They have lost 14 of 16 on the road, with their only wins over even-more-abysmal Charlotte and Cleveland.

Unless something crazy happens, the Suns will be further and further out of playoff contention (and they are already way out of it, in position for the #5 pick in the draft) as we get closer to the Trade Deadline, which is in mid February.

Before we discuss the upcoming trade deadline, let's first review what's happening this summer because THAT is the bigger picture. 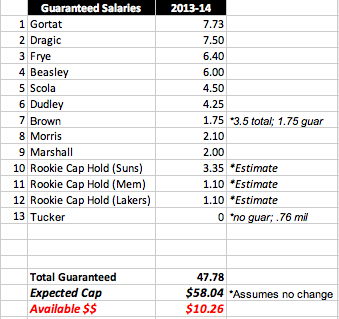 The Suns have 9 players under guaranteed (or partially guaranteed) contract for next season. If they keep P.J. Tucker, that makes 10. Add in three rookies and it's 13 - already a complete roster.

The Suns also have either 2 or 3 first-round draft picks in June, depending on whether Minnesota makes the playoffs. One of them will likely be a top-5 pick, while the other 1 or 2 will likely land in the 25-30 range.

If Minnesota makes the playoffs, the Suns get the worse of the Minny or Memphis pick this year. If Minnesota stays out of the playoff picture, they keep their pick and Memphis'. In that scenario, while Minny gets both picks this year, the Suns would be owed Minnesota's pick outright as soon as they make the playoffs.(and that would likely be better than Memphis' #25 pick this year in a bad draft).

The pick from the Lakers is UNPROTECTED. If the Lakers miss the playoffs, the Suns get their pick outright.

However, if the Lakers make the playoffs, the Suns get the worse of the Lakers and HEAT's pick.

But the most likely scenario is that the Lakers make the playoffs, leaving the Suns with their own lottery pick plus 1 or 2 in the 25-30 range.

Factoring in those draft picks and guaranteed salaries, the Suns will have $10 million to spend on a high-end free agent if they do not add salary this season by the trade deadline. If they keep Tucker (which they should), make that $9.5 million.

But they could easily have more.

If they release a player or two that was signed under the new CBA (Beasley, Brown), the Suns can lower their 2013-14 cap hit by another $5 million more.

That's now as much as $15 million to spend PLUS three first-round draft picks, as long as they don't add salary at the trade deadline next month.

Take a look at this year's salary situation when considering potential trades.

The Suns right now are $6.2 million under the cap, so they could conceivably add salary at the deadline if that gets them another high draft pick or long-term better player than anyone currently on the roster.

But they don't really want to add meaningless wins at this point, so it's not smart to acquire a guy that will get them an extra 5-10 wins over the current roster. 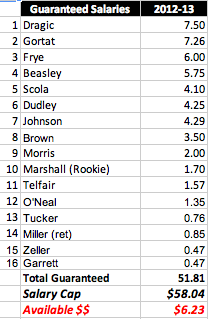 Here's the novel (and unpopular) path

But do the Suns really need to make a big trade right now? To trade away a starting center (Gortat), or a starting small forward (Dudley), or point guard (Goran Dragic)?

But hear me out for a minute.

You could make the case that adding a top 5 draft pick + a $10-15 million free agent + a healthy Channing Frye would get the Suns back into playoff contention as early as next season.

That's adding two players better than anyone currently on the roster, plus another proven veteran in Frye, without even subtracting solid pieces from this year's team.

So the question is: why trade anyone of consequence, despite the terrible record?

Because we want changes, dammit! That's why! We need a superstar! I'm tired of this treadmill!

Certainly true. The Suns need a superstar. They need youth, and a future. Yet that "youth and future" path likely means 4-6 years of lottery land. Once you're on that treadmill it's hard to get off it.

Why not get out quick?

Maybe that superstar is at the top of this upcoming draft? And if so, would that rookie superstar be better served with a veteran roster around them, or to be surrounded by other young players?

The Suns are full of good role players, and we always said that Gortat, Dragic and Dudley are really great 3rd-6th options on a playoff team.

Here are their options:

Instead of spending their free agent money this summer, the Suns could go "all in" and acquire someone like Rudy Gay or Josh Smith right now and use up that cap space.

That would likely get the Suns a few more wins (and worse lottery pick) without making the playoffs. But that would also ensure the money will be spent on a really good player, rather than another host of middling role players.

Only if the Suns can include guys on multi-year deals, like Dudley, Gortat and/or Dragic. If the Suns use all their expirings and "stretch" guys to acquire Gay or Smith, then the cap is busted for future years. The team is the team, until the summer of 2014 (when Gortat's deal expires).

If the Suns choose to stand pat, make a minor trade/release or two (Beasley, Brown) to relieve them of some more money next-year commitments, they have up to $15 million to spend this summer on a big name #1 or #2 type player.

But are there any of those guys out there this summer? Or will the Suns spend it on mediocrity?

Or, the Suns could go (for) broke

The Suns have no track record of doing well in either the draft or free agency, so those earlier plans might just go bust and leave the Suns in purgatory for longer.

The Suns could alternately start over. They could gut the roster for future assets and go the New Orleans Hornets/Cleveland Cavaliers route.

That would put the Suns in lottery land for years to come, which is exactly where the Hornets and Cavs are sitting now with no guaranteed end in sight.

What should the Suns do?

Should the Suns add a big name now via trade and forego what's likely a dry free agent market?

Or go with their current conservation plan, and add two big players to the current roster (big free agent plus top-5 pick) and make a playoff run in 2013-14?

Or, should they start all over, and maybe sit in lottery land for another half-dozen seasons?